Africa’s table tennis star, Funke Oshonaike has on Wednesday, April 13 recounted her ordeal in the hands of two abusive partners.

The Olympian alleged that she was a victim of domestic violence in two relationships, noting that said she was frustrated to a point that she wanted to kill one of her abusers.

Consequently, the 46-year-old advised lovers in an abusive relationship to ‘flee.’

Oshonaike promised to reveal more about the abuses she suffered in the name of love, in an upcoming autobiography.

The table tennis star recounted her ordeal following the tragic death of popular gospel singer, Osinachi Nwachukwu, who was subjected to physical abuse in the hands of her husband, Peter Nwachukwu.

I didn’t sleep well at all because of what I’ve been reading about Osinachi, the gospel musician that was physically abused by her husband until she lost her life!! I can’t even believe that some of you could have the guts to still be talking bad about her even in her grave, especially you Nigerian women!!

What they need from you is your words of encouragement, your help and your prayers. I’ve been physically, emotionally and mentally abused by two different men and I know how it felt.

The first one was at a younger age. He didn’t only abuse me, but carted away with all my money and my properties, I mean all that I worked for as a young girl. He dealt with me! I was his mugun, it was like I was charmed because all that I had was in his name!! I had to run away from him with the advice of some wonderful people around me and the advice the police gave to me. I had to start my life back when I came back from Atlanta 96. He was still waiting for me to come give him all I earned! But God delivered me from his wicked hands. Oh how much I suffered!! I was living in bondage! I was his slave.

The second was with my ex husband. A good and a kind man, but not a good husband to me. His own problem was his background. That’s what he saw growing up, so he didn’t know any other way to deal with an argument than to raise his hands. My parents, friends, loved ones, pastor, church couldn’t help me. They all told me he will change, or I should change from my ways, I should pray and fast for him, I should be patient etc but not to leave.

Do you know that he even beat me in front of my daddy and even in front of my pastor ??!! Hmm! This picture was taken the last time he laid his filthy hands on me. I took a knife to kill him, but I had to quickly drop the knife, took a picture of me and ran to the police. That was the last time he touched me because he was warned by the police that if he ever touched me again, he will be seriously punished and he won’t come near me and my kids again.

So my beautiful women out there that is going through an abusive relationship or marriage, please I understand what you are going through. I know how hard it’s for you. Please be strong right now and flee. Love yourself enough to know that you’re stronger, you will be fine . No man has the right to lay his filthy hands on you. Please I beg you, go away from him NOW! Let him go and sort himself out by going for a therapy or deliverance.

I was lucky to have survived two different abusive relationships, you might not! I had patience for more than 10 yrs with my ex but he never changed. I guess I should be blamed for that because I encouraged that for a long time.

I was afraid of how to start my life all over again with my two kids. It was very hard for me from the beginning with all the expenses but I am happier today because I left. This is just a tip of the iceberg with what I went through with my abusive relationships. More will sure come out by God grace in my autobiography coming soon by God grace.

“My heart goes to all the women going through physical abusive relationships. Please leave now! You deserve better. May Osinachi’s beautiful soul Rest In Peace.” 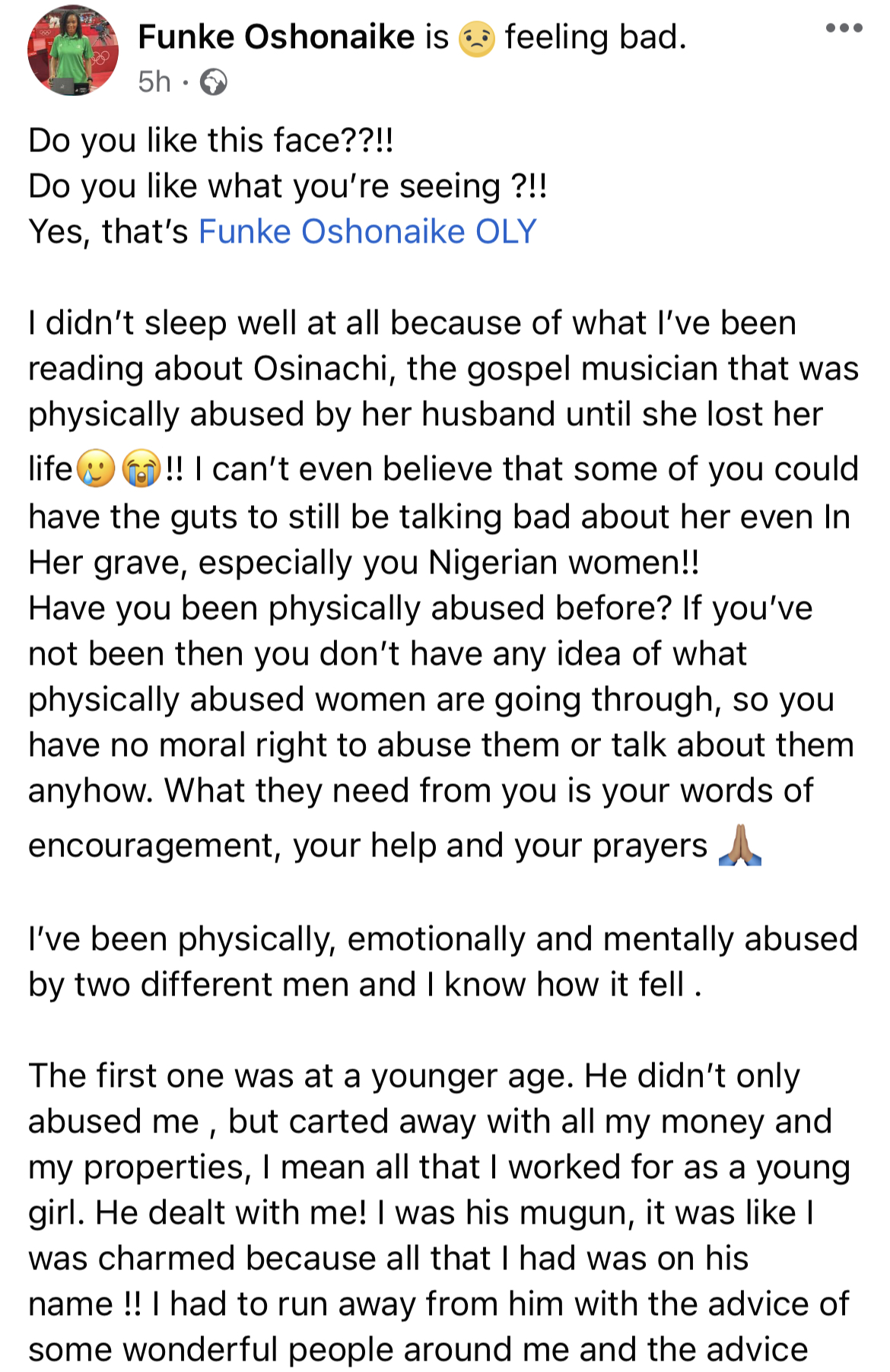 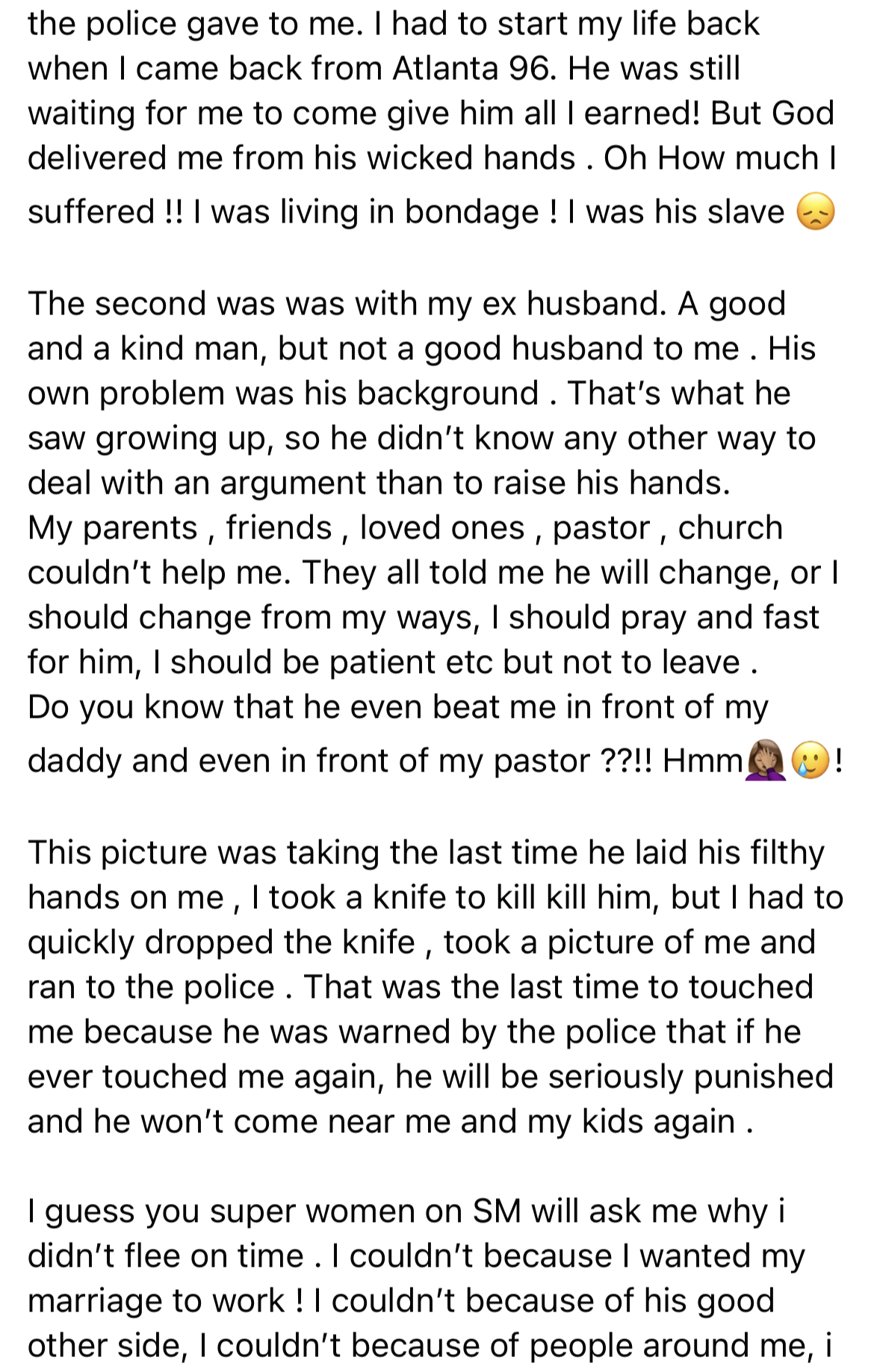 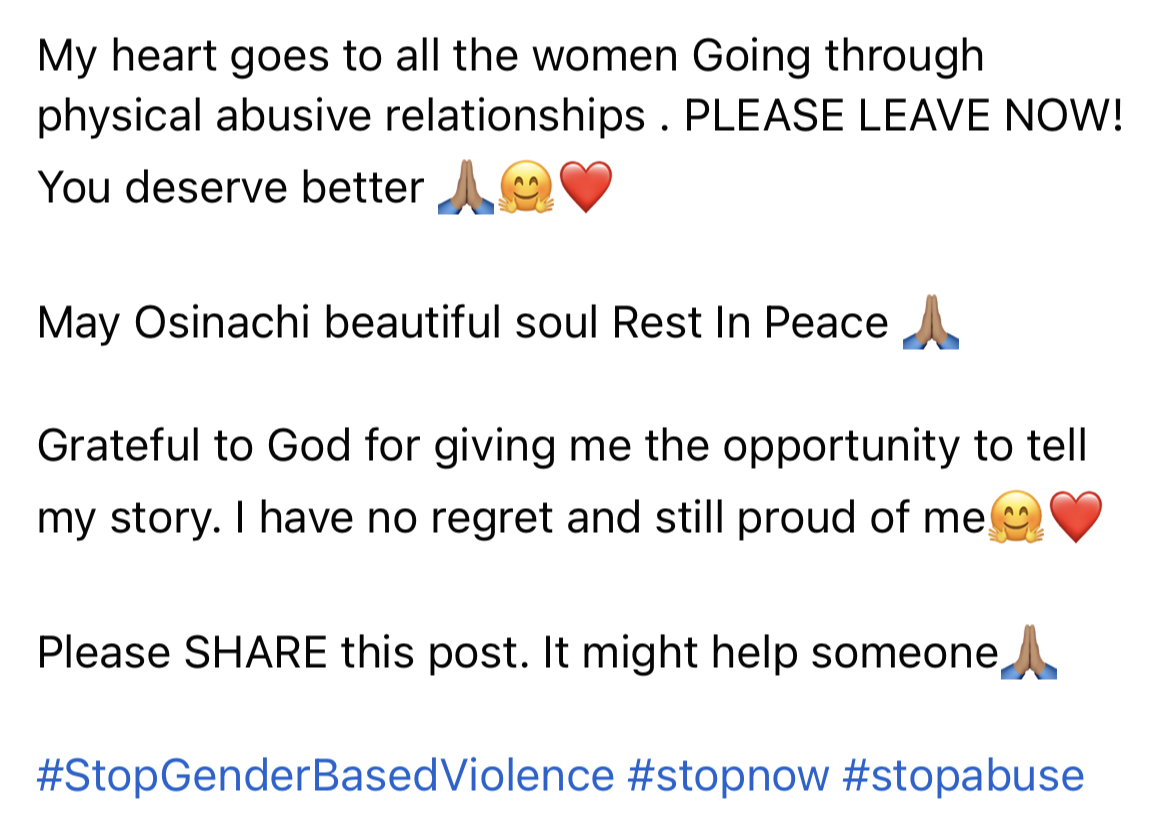 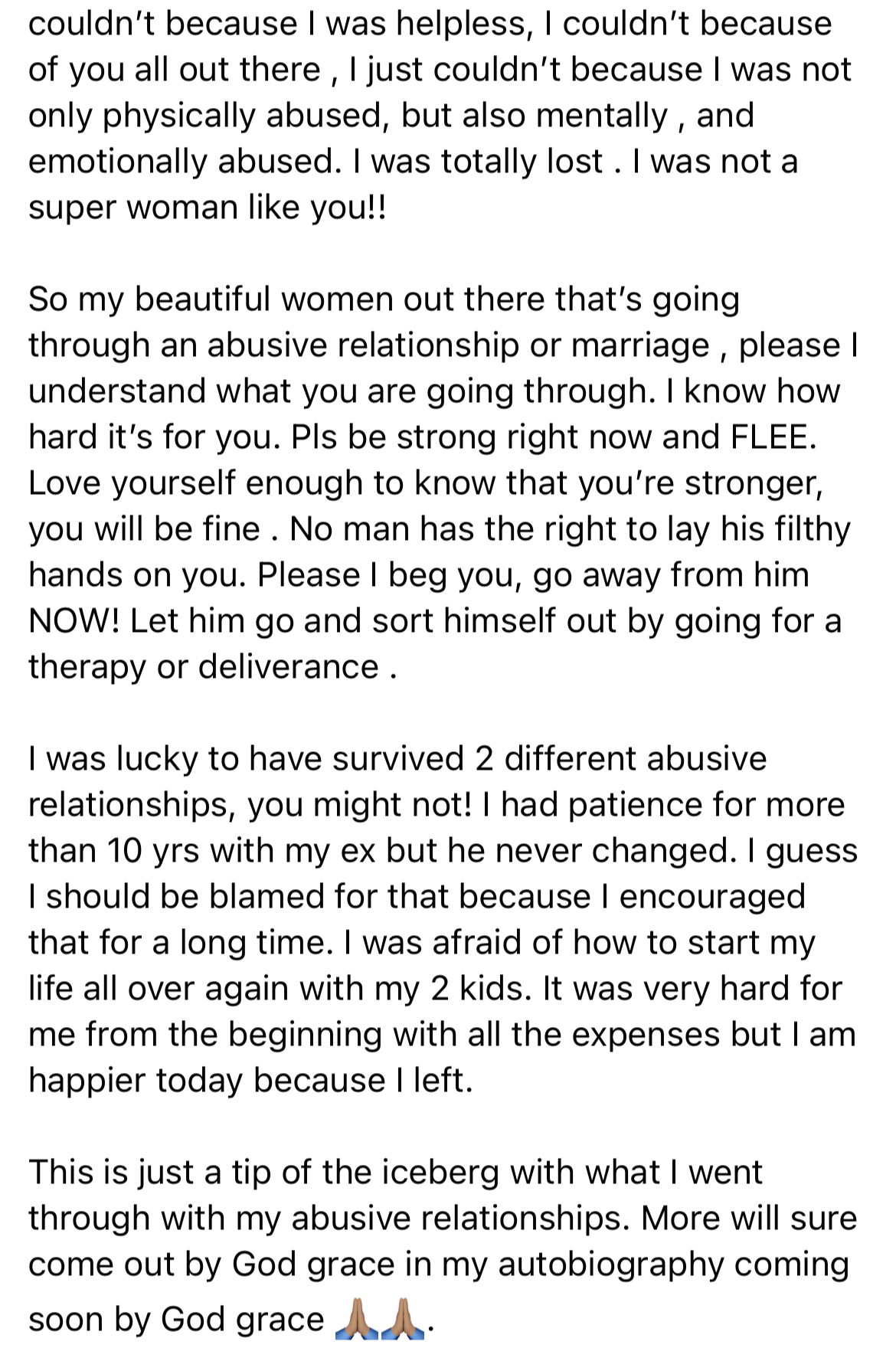