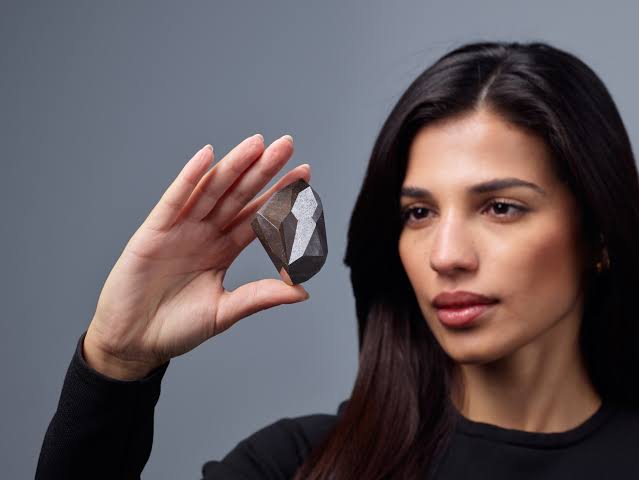 The rare gem, dubbed “The Enigma,” is believed to have come from outer space – created from a meteoric impact or from a “diamond-bearing” asteroid that collided with Earth 2.6 to 3.8 billion years ago.

‘The Enigma‘ was bought by Richard Heart — the founder of cryptocurrency company Hex — following an online auction by auction house, Sotheby’s in London.

He said he was renaming the rock as the ‘Hex.com diamond’.

I won the world’s largest cut diamond for our #HEXican cultural heritage! It’ll be called the HEX.com diamond, it weighs 555.55 carats and has 55 facets. Congratulations to all you #HEXicans.

The gem was acquired as a rough stone in the 1990s by its current owner, who had it cut into the current shape that was inspired by the Middle East palm-shaped symbol of power and protection, the Hamsa.

The rock is considered extremely heavy for a diamond, weighing about the same as a banana.

It is a carbonado, an extremely rare rock that has only ever been discovered in Brazil and the Central African Republic.

The gem is one of the most difficult substances to cut, but experts turned it into a 55-face jewel.

They are believed to originate from space because they contain osbornite, a mineral found only in meteors, but their precise origins are shrouded in mystery.

Last month, the diamond went on display for the first time, in Dubai, then it travelled to Los Angeles before going on sale during a seven-day online auction in London.

Guinness World Records listed The Enigma as the largest-known cut diamond in 2006, but it is not a gem quality diamond.

Carbonados are not normally used in jewelry or sold at auction, but their popularity has grown recently. Their hardness makes them especially useful for industrial drilling.