House Of The Dragon Review: Season 1, Episode 8 “Lord Of The Tides” 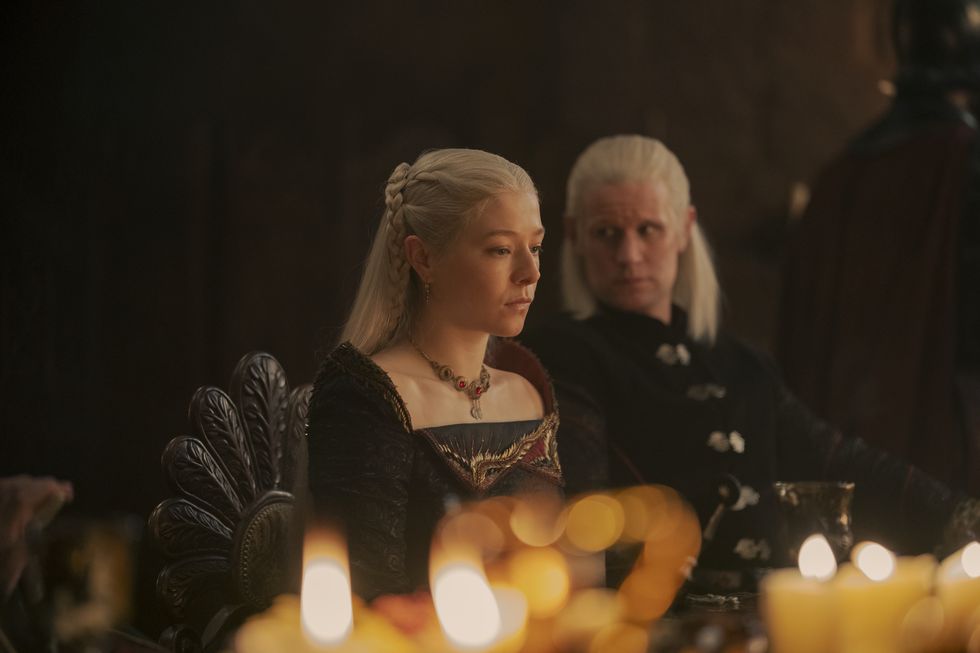 Eight episodes in, this has emerged as a central motif for House of the Dragon; its characters grapple with their decisions, weighing their desires against public perception (both in the present and the future).

That the viewer is so familiar with this world’s history – Game of Thrones begins almost 200 years later – adds another layer to the unfolding history. The Targaryen dynasty burns out – remembered mostly for their dragons, incest, and insanity – but watching these characters act as though they may live forever has a certain mad charm.

Death seems to be playing a more important role than usual in the past couple of episodes of House of the Dragon. Represented in the Faith of the Seven by the Stranger, Death is without a doubt one of the main characters of this week’s “The Lord of the Tides,” and it also spent a good deal of time in the limelight in last week’s “Driftmark”.

Though it isn’t rare, of course, for important characters to suddenly kick the bucket in the Game of Thrones universe, rearranging all the pieces of the titular game, never have we lingered so long on the immediate impact of someone’s passing than in Episodes 7 and 8 of this first season of House of the Dragon.

But while “Driftmark” devoted a good chunk of its runtime to the mandatory rites and pleasantries that come after a person’s death, “The Lord of the Tides” concerns itself with what must be done in the days that precede that dreaded visit from the Stranger, especially when the one he calls upon is a lord or a king.

As Lord Vaemond Velaryon (Wil Johnson) learns the hard way after calling Rhaenyra’s (Emma D’Arcy) children the b-word, the Stranger doesn’t always announce its arrival — but, sometimes, he does.

When this happens, it is up to the soon-to-be-deceased’s friends and family to do everything in their power to assure their loved one will have a peaceful passing.

There are also financial and bureaucratic matters that must be attended to, especially when there’s a hefty inheritance on the table, all while doing your best not to act as if the not-yet-departed is already gone. It is a delicate balance that many find hard to achieve, and living in Westeros makes it all the more difficult.

And so, with Lord Corlys (Steve Toussaint) and King Viserys (Paddy Considine) just waiting for the Stranger to knock on the door, it is only expected that Houses Velaryon, Targaryen, and Hightower are butting heads over what should be done with the Driftwood and Iron Thrones.

All in all, “The Lord of the Tides” is a somewhat uneventful episode by House of the Dragon standards, albeit an important one. Sure, there is no one getting beaten to a pulp at a wedding and all children remain in full possession of their eyes, but the pieces of the game have once more been rearranged.

Lord Corlys is out of the picture, and the king might soon be as well. Driftmark and its fleet are about to be under Rhaenyra’s control, and Alicent believes she knows some secret about the realm that she doesn’t actually understand.

Last, but not least, the kids are all grown up, and their upcoming nuptials symbolize the strengthening of political alliances. There’s a lot at stake, even if what’s happening on screen isn’t all that riveting.

That being said, Paddy Considine and director Geeta Vasant Patel deserve to be complimented for that beautiful final scene. The king’s whispers of “No more” is heartbreaking, and the lighting and slow-paced camerawork make the scene all the more touching.

We actually get to see what happens, which isn’t always a given when it comes to Game of Thrones and House of the Dragon, and yet the darkness still reflects Viserys’ pain and isolation from the world around him.

It’s tough to say whether the king has indeed received that long-awaited visit from the Stranger, but if we don’t see him around next week, this scene was a fitting goodbye.

House of the Dragon Review: Season 1 Episode 9 ‘The…

House Of The Dragon Review: Season 1, Episode 5 “We Light…