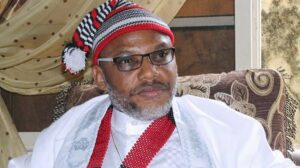 Leader of the proscribed Indigenous People of Biafra (IPOB), Nnamdi Kanu, on Wednesday, May 18, told a Federal High Court, Abuja that he has been a fan of Liverpool Football Club from childhood.

Kanu, who disclosed this when Justice Binta Nyako jokingly asked him his favourite football team, said Liverpool F.C. had been his club since he was seven.

The development occurred when Kanu’s lawyer, Chief Mike Ozekhome, SAN, complained that the Department of State Services (DSS) had not been allowing him and other counsel enough time to meet with the IPOB leader whenever they visit him in detention.

Justice Binta, who reminded Ozekhome that he had once thanked the DSS in open court for procuring an orthopedic mattress, pillow, and others for his client, said she had already ordered that the security outfit should give Kanu moderate treatment and care while in detention like food, clothing, medicare, etc.

Then Nyako turned to Kanu and said despite her order for him to change his clothes, the IPOB leader continued to put on the same milk-colour designers wear.

She said though Kanu, on his own accord, keeps coming into the court with the same attire, she saw him in the media with other clothes.

The judge then jokingly said she was a Liverpool F.C. fan and asked Ozekhome if he was also a fan of a football club, and the senior lawyer answered in affirmative.

He said he was also a fan of Liverpool F.C.

Nyako then asked Kanu if he was a fan of Chelsea Football Club going by the designers’ clothes he keeps wearing to court.

What is your team?

Kanu gently stood up on the dock and said;

My team is Liverpool even from age of seven.

The judge then told the DSS legal director who was in court to always allow Kanu to watch the matches of his favourite football club.

You must allow the defendant to watch the matches any day they are playing.

The DSS official, however, said his office had always given him access to watch television.

Igbo Politicians Should Be Blamed For Presidency’s…