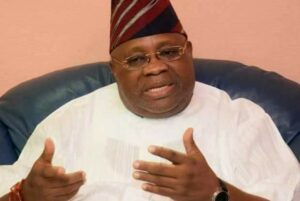 A Federal High Court, sitting in Osogbo, has on Wednesday, May 17, affirmed Sen. Ademola Adeleke of the Peoples Democratic Party (PDP) as the authentic candidate of the party in the forthcoming July 16 governorship election in the state.

Justice Nathaniel Ayo-Emmanuel, in his judgment, which lasted for more than 1 hour, 30 minutes, held that the primary election conducted at the WOCDIF Centre, Osogbo, on March 8, which produced Dotun Babayemi, was null and void.

PDP during its governorship primary elections on March 8, had held parallel primaries in the state.

Ayo-Emmanuel, who cited Section 84 (14) of the Electoral Act, after a thorough proceeding and counterarguments by both counsels, dismissed the suit filed by Babayemi.

He said it was only the aspirant(s) that participated physically at the primary conducted by the PDP National Working Committee and not the one conducted by the party’s state executives that have power and locus standi to challenge such suit in court.

The judge upheld the governorship primary conducted by the PDP National Working Executive Committee at the Osogbo Township Stadium that produced Adeleke.

He said the claims of the plaintiff lacked locus standi, because he did not take part in the National Working Executive Committee primary election organised by his party on March 8, which was supervised by the Deputy Governor of Bayelsa, Lawrence Ewhrudjakpo.

In one of the primaries held at the Osogbo City Stadium, under the supervision of the Deputy Governor of Bayelsa, Mr Lawrence Ewhrudjakpo, as Chairman, Sen. Ademola Adeleke was declared the winner.

However, in another primary held at the Women and Children Development Initiative Foundation (WOCDIF) Centre, Osogbo, Mr Dotun Babayemi, was declared the winner.

In a list of candidates later released by the Independent National Electoral Commission (INEC), Adeleke was recognised.

Babayemi, however, approached the court challenging the nomination and submission of Adeleke by the PDP to INEC.

He is also challenging the validity of the governorship primaries conducted at the stadium against the one held at WOCDIF.

Babayemi, after the court session, told newsmen that the matter was a “family affair”.

He said his legal and political team would review the judgment in the best interest of the state.

Babayemi added that his decision on the judgment would be in the best interest of the state.