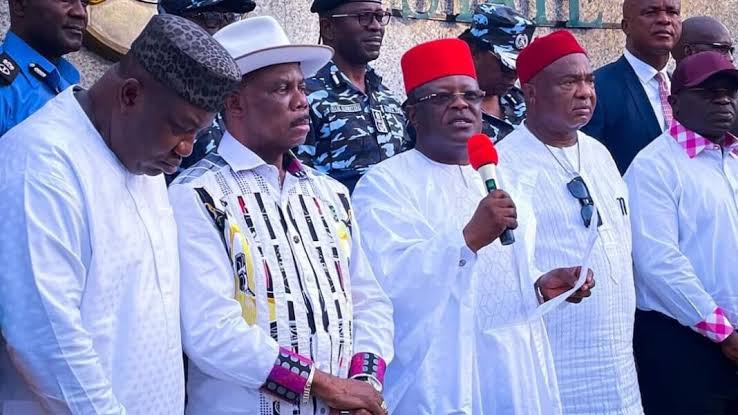 South-East Governors Forum, Igbo leaders and Ohanaeze Ndigbo will meet President Muhammadu Buhari within the first quarter of this year over Nnamdi Kanu, the detained leader of Indigenous People of Biafra (IPOB).

According to ThePunch, governors and Ohanaeze Ndigbo would present the reports of the committee set up over Biafra agitations to the president at the meeting.

Confirming the development, National Publicity Secretary of Ohanaeze Ndigbo, Chief Alex Ogbonnia said the Igbo leaders would explain to the President the need to resolve the issues of Kanu and IPOB through political solution and dialogue.

Ohanaeze Ndigbo, South East governors and prominent Igbo leaders will meet with the President within the first quarter of this year. We in Ohanaeze, having looked at the issues of Nnamdi Kanu, IPOB and so on, believe that they require a political solution because they represent phenomena of a kind.

What they represent is like — when you talk of marginalisation, alienation, injustice, inequity, unemployment and inability of the authority to listen. On the other hand, the gap between the government and the people, all these things are encapsulated into what is called IPOB. So I want people to understand that IPOB/Nnamdi Kanu is more like an outcome, an effect, it is a reaction but the cause is somewhere else.

That reaction is pervasive and the effect is affecting everybody. Everybody is worried about the number of checkpoints we have on the road. From here to my community is supposed to be 30 minutes but it will take you two hours or more. The road is so bad and unemployment is high.

Ogbonnia expressed the belief that by the time all the issues are explained to the President, he will have a change of mind on Kanu.

Kanu is being tried over charges bordering on terrorism and treasonable felony.

The IPOB leader is currently in the custody of the Department of State Services and is expected to appear in court on Wednesday, January 19, 2022, for the continuation of his trial.