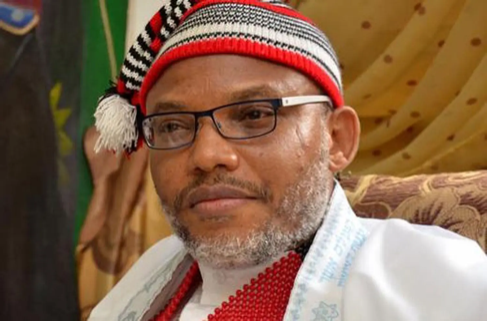 Federal High Court sitting in Abuja has ordered the DSS to return the glasses of Nnamdi Kanu, leader of the proscribed group, Indigenous People of Biafra (IPOB).

The trial judge, Justice Binta Nyako, gave the order after the defence counsel, Mike Ozekhome, complained that Nnamdi Kanu’s glasses need to be returned to him, so he won’t go blind.

Mr Kanu is accused of various offences, including treasonable felony and terrorism, offences he allegedly committed in the course of his separatist campaigns.

The trial resumed around 1:00 pm on Wednesday and started with a complaint raised by Ozekhome that his client’s glasses was taken away from him since 2015.

Ozekhome, who recently took over the defence team of the embattled IPOB leader, decried that his client’s eyeglass was confiscated in 2015, when he was initially arrested by DSS operatives, following his return to Nigeria from the United Kingdom.

He also told the court that a new eyeglass that Kanu bought was also seized from him during his extraordinary rendition from Kenya.

Also, Ozekhome lamented that despite an express order of the court, the DSS declined to allow the IPOB leader to have a change of clothing.

He added that the security agency refused to allow Kanu to receive new clothes that were brought to him by his younger brother.

The lead counsel also lamented that since Kanu was arrested and detained, his eyeglass was seized by the DSS and has not been returned to him. He asks that his glasses, be returned to him so he doesn’t go blind.

Justice Nyako said the complaint has been noted and directed Ozekhome to proceed with the business of the day.

After hearing from both counsel, the matter was then adjourned to April 8 to rule on Kanu’s applications to quash the charge.

The court also asked the DSS to provide Kanu with his eyes glasses.

Why Nnamdi Kanu Is Not Allowed To Change His Clothes – DSS