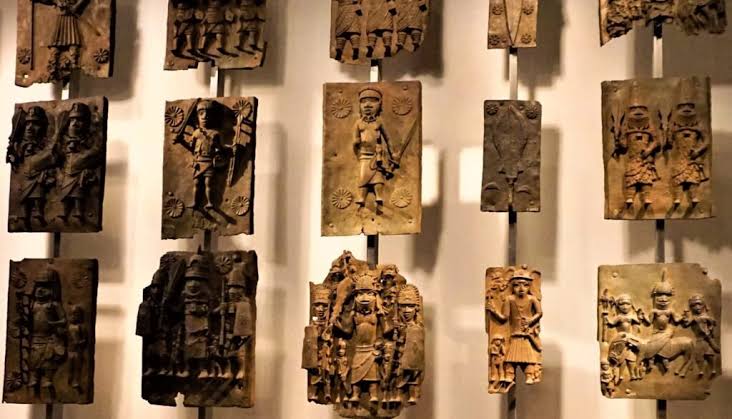 Egyptian government has offered to assist Nigeria in preserving the 1,130 looted Benin bronzes expected from Germany.

The artefacts, with the least weight of 30kg, looted by British troops in 1897, are to be repatriated from Germany to Nigeria this year.

Egypt Minister of Tourism and Antiquities, Khaled El-Anany made the offer in Cairo, Egypt, when the Minister of Information and Culture, Lai Mohammed, visited him.

The meeting was on the sidelines of a bilateral discussion with Africa Export-Import Bank (Afreximbank) on how Nigeria can access funding to support its growing creative industry.

Mr Mohammed had led some private sector stakeholders involved in Digital Switch Over (DSO) to Afreximbank to assist them in sourcing funds to complete the wholly private sector financially driven project.

The Egyptian minister said they were willing to deploy their wealth of experiences in antiquity preservation management to assist Nigeria in preserving the treasure expected from Germany.

Mr El-Anany disclosed that tourism contributed not less than 30 per cent to Egypt’s GDP, and the Department of Antiquity alone under his ministry employs 32,000 personnel to manage their museums and monuments and archaeological sites.

According to him, Egypt has more than 2,000 tourist sites, and 60 per cent of the tourists visit historical sites, museums and operas.

He said Egypt suffered a similar fate, and they had successfully repatriated a lot of their antiquities stolen and transported outside the country’s shores.

The minister urged Mr Mohammed to work with the Nigerian Ambassador to Egypt, Malam Nura Rimi and some key staff members to develop the framework to actualise the offer for assistance.

He extended an invitation to Mr Mohammed to attend the African conference on antiquities and tourism, organised in June in Cairo.

Mr Mohammed, who said he was at the ministry to compare notes, acknowledged that Egypt was one of few countries with the world’s richest and oldest historical and religious sites.

He said Nigeria was willing and ready to learn from the rich experiences of Egypt in tourism development and management.

House Of The Dragon Review: Season 1, Episode 8 “Lord Of The Tides”

House Of The Dragon Review: Episode 3 “Second of His Name”

Benin Royal Museum Is Rightful Place For Return Of Stolen…