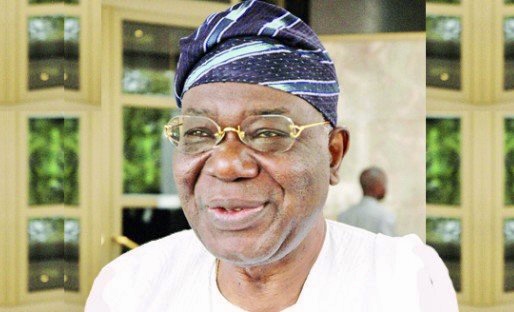 Chief Ernest Shonekan, the former head of the Interim National Government that succeeded the military junta of General Ibrahim Babangida, has passed on.

Shonekan, Abese of Egbaland, died at Evercare hospital, in the Lekki area of Lagos state, at the age of 85, ThePunch reports. However, cause of his death is yet to be known.

Shonekan was born and raised in Lagos, the former Nigerian capital. The son of an Abeokuta-born civil servant, he was one of six children born into the family.

Shonekan was educated at C.M.S grammar school and Igbobi College Yaba. He also attended and received a law degree from University of London, and was later called to the bar.

He joined United African Company in 1964, and was later sent to Harvard Business School. At UAC, he pursued a legal path; a few years after joining the company, he was promoted to the position of assistant legal adviser. He became a deputy adviser two years later, and soon joined the board.

Shonekan was the interim head of the Nigerian government between August 26 and November 17, 1993, before he was ousted in a coup led by late General Sani Abacha.

He was the Chairman of the interim National Government between August 26 and November 17, 1993 when he was ousted in a palace coup led by late General Sani Abacha who was Secretary of Defence.

Shonekan’s transitional administration only lasted three months, as a palace coup led by General Sani Abacha forcefully dismantled the remaining democratic institutions and brought the government back under military control on 17 November 1993.

In 1994, he founded Nigerian Economic Summit Group, an advocacy group and think-tank for private sector-led development of the Nigerian economy.

Since then Shonekan has gone on to feature prominently as an elder statesman, he is the third oldest surviving Nigerian head of state by age afterElizabeth II and Yakubu Gowon.