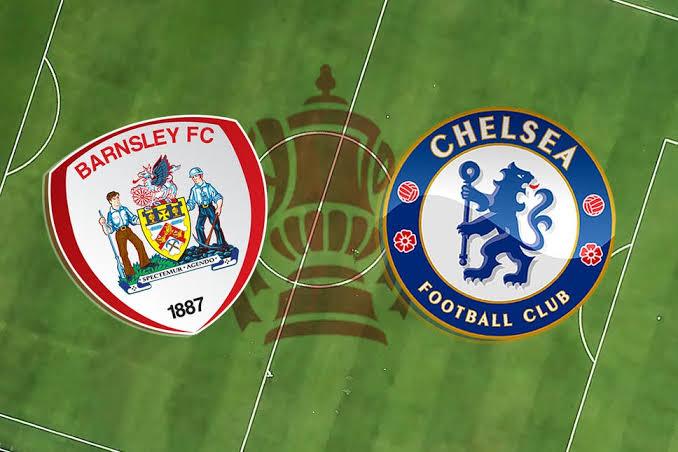 Chelsea will be looking to maintain their unbeaten streak under Thomas Tuchel in tonight’s FA Cup fixture against Championship side Barnsley for a place in FA Cup quarterfinal.

The Blues (Chelsea) travelled to Oakwell on the back of their 2-1 away victory over Sheffield United on Sunday.

Mason Mount opening the scoring on the night, before Antonio Rudiger levelled the scores with an embarrassing own goal.

Jorginho scored the winner for the Londoners from the spot, it was the second game running where the Italy’s international had proved the difference in a league game, having scored the only goal in their match against Tottenham from the penalty spot.

Since Tuchel took over from Frank Lampard as Chelsea’s boss, they have won three matches and drawn one, today’s fixture against 10th placed Barnsley who have won 11 matches and lost 11 from 27 games shouldn’t be a difficult hurdle for the blues.

The Tykes (Barnsley) drew 0-0 with Nottingham forest last time out, three days on from another draw against Cardiff City. They have won their previous two meetings against Chelsea in this competition- 4-0 in 1989 and 1-0 in the 2008 quarter finals.

Chelsea have been eliminated from FA Cup by lower-division teams just twice in their last 54 attempts, Barnsley and Bradford are the two teams to do so.

The Blues eased past Morecambe and Luton town in the third and fourth round respectively, while their tonight’s opponents have eliminated Tranmere Rovers and Norwich City to set up this tie. Barnsley have not conceded a goal in their two FA Cup matches.

The host have not played a game in nearly two weeks due to their last league game at Derby County postponed because of a waterlogged field, so they should be fresh coming into this fixture.

Thiago Silva will be absent at tonight’s game due to hamstring injury he picked up against Tottenham Hotspur. Kai Havertz and Timo Werner are expected to be part of the squad, having shaken their knocks.

Barnsley Manager, Ismael will be without the likes of Aapo Halme, Ben Williams and Liam Kitching due to injuries.