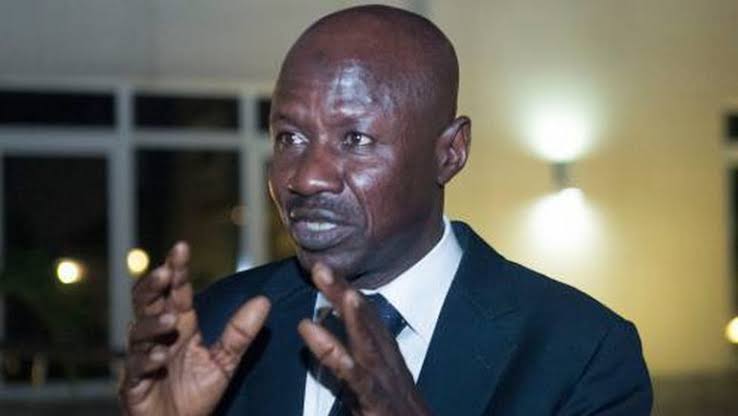 Presidential panel investigating corruption allegations against the suspended acting Chairman of the Economic and Financial Crimes Commission, Ibrahim Magu, has reportedly quizzed the EFCC Secretary, Olanipekun Olukoyede, and some directors of the commission.

According to the Punch, EFCC officials were on Thursday questioned about the allegation of diversion of recovered funds levelled against Magu.

Top officials of the EFCC were reportedly invited to either corroborate or fault some explanations Magu had made before the panel.

The suspended EFCC boss has been in the police detention since Monday when he was arrested in front of the old EFCC headquarters on Fomella Street, Wuse 2, Abuja and made to appear before the presidential panel at its sitting in the old Banquet Hall of the Presidential Villa, Abuja.

The suspended EFCC boss had been subjected to several hours of interrogation since Monday by Justice Ayo Salami-led panel.

He was asked to respond to 22 weighty allegations levelled against him by the Attorney-General of the Federation and Minister of Justice, Abubakar Malami (SAN), in his memo to the President Muhammadu Buhari.

Besides alleged diversion of recovered loot, Magu was accused of selling or mysteriously releasing about 157 oil tankers seized in Port Harcourt without following due process.

He has also reportedly been quizzed about 380 houses and seven vessels loaded with crude oil as well as the disposal of assets worth N37 billion.

Magu was grilled on cash discrepancies said to be N539 billion realised from the sale of seized assets and N504 billion declared by the commission, Vanguard reports.

Also, a report by the Auditor-General of the Federation last year alleged that about N13.96bn recorded as salaries and wages in the consolidated financial statement of the EFCC were not in the anti-graft agency’s trial balance submitted for reconciliation.

Magu arrived at the Aso Villa Banquet Hall as early as 9am, according to his lawyer, Tosin Ojaomo.

The suspended EFCC boss was subsequently brought before the panel led by Salami, and the Deputy Inspector-General of Police, FCID, Mike Ogbezi.

After Thursday’s interrogation, he was again driven back to the Force Criminal Investigation Department, Garki, where he spent the fourth night in police custody, Punch reports.

The directors who were quizzed by the panel, absolved themselves of involvement in funds diversion.

Speaking on plans to secure the release of his client, Magu’s lawyer said he would submit an application to the police authorities for his release.

He explained that he was unable to see his client on Thursday, despite waiting for hours at the Force Criminal Investigation Department, Garki.

I just left the FCID now (8:30pm) having waited endlessly to see Magu, but they had not brought him back from the Presidential Villa. Tomorrow (today), I will file an application before the police authorities for his release.

In another interview, he said;

We are still trying to get him bailed. I was there early in the morning but I was told he had already been taken to the Villa. They have not shown us any remand order. However, I was told that he is being treated decently.

The problem is that once he is taken from there (FCID) at about 8am, he remains with the panel till evening. The DIG is the one in charge as regards detention and he has the power to approve administrative bail. I have been trying to see him as regards Magu’s case.

When asked about the status of Magu, Ojaomo responded:

He is in high spirits. I am confident that Magu will emerge victorious.

The lawyer said he would return to the FCID on Friday (today) to make a formal application for bail.

Ojaomo rubbished speculations that Magu could be detained perpetually without a court order because he is a serving police officer.

Our aim, for now, is just to get him out of there. Every Nigerian has a constitutional right to liberty. Even though what we hear these days is that the police can keep him because he is a senior officer, I do not subscribe to that. He ought to be treated like a Nigerian.