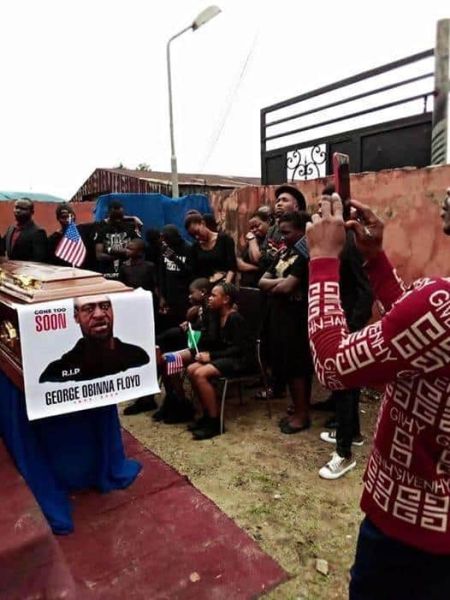 On May 25, 2020, 46-year-old George Floyd was gruesomely murdered by white police officers during an arrest, which sparked a worldwide outrage, leading to series of protests in many parts of the world.

Read Also: US Police Derek Chauvin Who Killed George Floyd By Kneeling On His Neck Charged With Murder 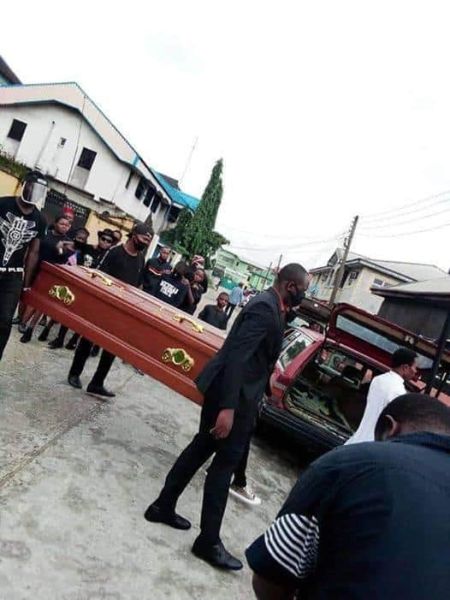 I have traced the ancestral root of George Obinna Floyd to Umuoffor kindred in Obokwu obibi Aboh Mbaise Imo State and I feel so happy now that we have reburied him alongside with his ancestors.

In photos of the burial that made the rounds on social media, a poster could be seen where Floyd was given a Nigerian name, Obinna. 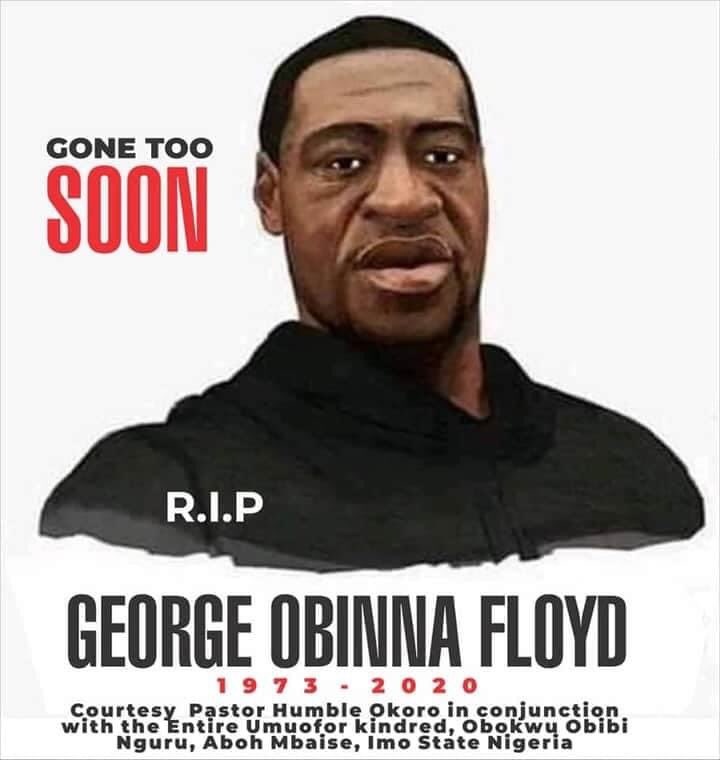 This has however sparked reactions from many Twitter users, as some speculate that a movie was being shot or it was for a diabolical purpose.

I wanted to laugh, then i remembered that Nigeria has many people suffering from mental illness pic.twitter.com/s3rueQmPsD

Hahaha..this was a contract, this people can’t do this for free, money was involved, Igbo people can’t waste their precious time on something like this if it doesn’t bring money, trust me .

This is the second symbolic funeral held in George Floyd’s name (first was a “vodun” ceremony in Dahomey). I’ve never seen this before. I am not a spiritual man but there’s a deeper meaning behind this symbolism, it’s not random

I really like Nigeria people there they have sense of humor 👆

Oh seriously this is foolishness..there are so many of vulnerable people in Nigeria who need a little money to take care of their families instead of supporting them, people are just wasting money for unnecessary things.
Indeed Africa love spending on funeral then to help people

Perhaps the Nigerians want to earn a Guinness World Record for having buried a Nigerian twice. First, the real one in the US and the resurrected who died on arrival in Nigeria. Never happened before!! The Guinness Awards Committee kindly recognise this innovative AI life shelf!♨️

Pure madness from my Nigerian brothers. Meanwhile people are being killed everyday in the northern part, police brutalising innocent people and this idiots won’t say a thing. Quite unfortunate.

When you need SARS in this country,you won’t see them.They should have been arrested to show the death certificate of the deceased. pic.twitter.com/NmgQCgX1cE

I only recall the name “Obinna” from the Nollywood movies.😂Nigerians though! pic.twitter.com/s0adruHqzf

These ppl are mocking the death of George…the World will never take Africa serious..

Ok
The people who did this doesn’t have sense…. People are dying in Nigeria daily they didn’t honor them,it’s now this guy😤🤦