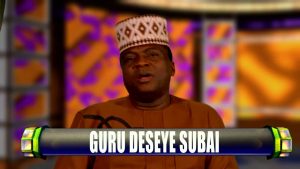 The trend lately is to manipulate scriptures in fulfilment of defined interests, in doing this, celestial authorities are questioned and common sense prism advanced. Forgetting that no man, no matter his intellectual expansiveness can dwarf what has been written by divine judgment. We have seen it before the world goes, and feeble attempts to distort the decree of the lord will continue but the potency of such attempt will eternally dwell in vain.

In a world where individuals search and seek for quick metaphysical explanations to their predicament, one shouldn’t be surprised that individuals such as Guru Sabai are quick to offer explanations and prescription that manipulates the innate curiosity and psychological fragility of people. By blending Hindusim and Christianity, Guru Subai has consistently exploited the gullibility of some to promote his new religion cloth in myths. This attempt to use logic and the wisdom of man to rationalize God was long foreseen long ago in  the bible when in the book of Timothy 2:4 it was stated that,

“For the time will come when people will not put up with sound doctrine. Instead, to suit their own desires, they will gather around them a great number of teachers to say what their itching ears want to hear. They will turn their ears away from the truth and turn aside to myths.

Guru Subai relentless and provocative attack against the fundamentals of Christianity has assumed another dimension. Hiding under the cover of logic and rationality,  he as attempted to demolish the foundation of the modern church of Christ forgetting the biblical inference which says that the ways of God is not the ways of man and the wisdom of man is foolishness in the sight of the lord.

He has attempted to create a new concept of marriage and morality that is not in accordance with what is written in the books. To him, the modern church is but of device of the devil. In a way, Guru Subai has attempted to create his own version of religion that appeals to but the interest of Christ. Little wonder he goes around claiming to possess spiritual powers that can heal all sort of diseases from HIV and AIDs to the least disease with no definitive proof. What will baffle any true believer is his method of healing and deliverance.  He admits to using unconventional methods in healing his followers while the bible approves of prayers  In the name of Christ alone as our shield against the forces of darkness.

To an unsuspecting Christian not grounded in the bible, the prism of Guru Subai teachings is appealing but to someone spiritually conscious, his words and actions are a confirmation of the prophetic warning Jesus gave in the book of Mathew 7:15  where he instructed the brethren to “Beware of false prophets, which come to you in sheep’s clothing, but inwardly they are ravening wolves.” Guru Subai is a wolf in sheep clothing. He claims not to profess the Christian faith yet he performs miracles using the name of Christ. No wonder the bible said in the book of Mathew 24:24 “For false messiahs and false prophets will appear and perform great signs and wonders to deceive, if possible, even the elect.” Guru Subai is preying on the church and God’s elect but the church will rest on the word of the lord for judgment. Ezekiel 13:19 was explicitly clear when it promised that “My hand will be against the prophets who see false visions and utter lying divinations. They will not belong to the council of my people or be listed in the records of Israel, nor will they enter the land of Israel. Then you will know that I am the Sovereign LORD.”

You may argue that I am not a Christian and though stands on no authority to talk about the church, you can’t deny my the explicit messages in the Bible which gives me sufficient authority to argue in defence of truth against falsehood. This is part of my freedom of expression and exercises it within the provisions of the law.