She said this while speaking to Elsie Godwin, on Plus TV Africa’s interview show One on one.

About 12 minutes into the interview, the interviewer Elsie said to Tonto Dikeh, who corrected her at the beginning of the interview that she would rather be addressed as ‘King Tonto’ that in answering the previous question on ‘fake love’ in the industry, she seemed to have confirmed a controversial stance by Princess Shyngle. The stance was that ‘Nollywood actresses recycle men’. The actress brazenly answered:

“Of course that’s what we do.”

Elsie then asked “And there’s proof to that?”
To which she retorted:

“Do I have to prove anything? Can you prove anything that goes into someone’s vagina?” She replied. “You can’t proof that can you? “ She said offhandedly.

Earlier in the interview, she said many interesting things, one of which is how she stumbled into acting despite reading petrol- chemical engineering, and how it changed her life.

“Being popular brings favours, doors fling open for me where doors are closing shut for people,” she said.

About reality TV, and going into it for fame, the actress answered:

“Everyone going into the reality TV thing does it for the fame. Just chase the right clout, chase the right game, start focused . As long as you want to get popular, there’s ways a price right? So just focus.”

Responding to the backlash she got from people who said she should advice one of her besties Bobrisky, a renown crossdresser instead of advising Cossy Orjiakor and saying God could use her, she said:

“People are entitled to their opinion, my friendship with Bobrisky is fine, I don’t bring personal relationships on online.”

The interview then gets even more interesting. Elsie asks about her relationship with God and typing in tongues to which she responded:

When asked why she had been scarce in movies, and whether she was considering retirement, she answered:

“I never retire. But as it stands now I’ve played it all there isn’t much challenge. There is no fierceness, no adrenaline rush. Different things come into play on why I’m not in screen today. I don’t think I’ve found any new script I want to act in.”

On producing her own movies she said stated that she would love to tow Genevieve Nnaji’s steps on how she sold her new movie ‘LionHeart’ to Netflix. She said:

“Even tho production isn’t for everyone, Genevieve has made me understand I can do it from time to time. She opened a portal that made me believe that I can do a great movie that will get me where I want to be. She paved a way, she has inspired me a lot.”

When asked about privacy, the 33-year-old mother of one said that Nollywood movie makers were sometimes the ones who pirated their movies.
“We are the ones killing ourselves. If we can stop the corruption inside, then we can stop that outside. The ones doing it inside to themselves have to stop,” she said. 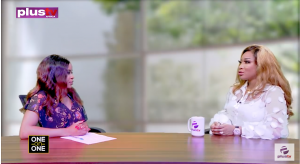 Elsie then asked her about ‘Fake love’ in the Nigerian movie industry and her stance on it to which she said:

“I don’t care…”
“We don’t have to friends. I just come to work greet everyone and leave. We don’t have to have a relationship.
We are all here fighting for the same thing, it’s a circle, we share- same men, same clothes same movies, same things, it’s a cycle. So why would I want to be friends with someone who wants my life? Come to work do your work and go. I’m not saying be enemies with anybody, I really don’t care about fake love, I just do my job.”

On her music career, and if fans should expect something soon, she said:
“Well, if I have the opportunity to come back musically, definitely I will do one or two songs again. It’s not something I’m itchy or eager to do however. I’m a woman now, I was a girl before, but now I have a child, I have businesses, I have over 30 staff, I have over 3700 children I pay school fees for. I need things, like the things I’m getting in Abuja, getting contracts, selling, building houses, not music. Music is good, I’m not saying it isn’t. Just wasn’t my strong point. But if I have free time, definitely!”

She also added that her break up from Dbanj’s DB records was mutual and friendly, and they still remain great friends till date.

Talking about her foundation The Tonto Dike Foundation, she said it has been around for 12 years and started from Liberia after she was invited by the then President of the country.

“Before the foundation, I came from a church where giving us a lifestyle. I’ve always been a giver. Now it just happens to be that I have a platform, I have a voice and I have the opportunity to give back. The foundation is just to make it bigger.
I am very proud of the foundation, it makes me happy. Seeing people happy makes me happy. Infact that’s one of the only things that make me happy. Being the reason why other people are happy, it’s intriguing.” She said.

The interviewer Elsie Godwin then asked her a question on her life so far, to which ‘King Tonto’ answered with reference to her marriage, a very touchy topic for the actress who has been embroiled in what seems like an unending rhubarb with her ex husband Olakunle Churchill. Elsie asked:

“Looking at your journey so far, what would you do differently?”

On returning back to Nollywood, she answered:
“I’m still in Nollywood, I haven’t gone anywhere. I just haven’t found a challenging script yet.”

When asked about her brand and how controversial she is, Tonto replied:

“I have done just one movie in the last 6 years, yet I’m still one of the most talked about, as a matter of fact I’m still one artist that generates money for any blogger, and TV station, any media house. The controversy kept me in that space where I make money for people. But your favorite artists, the people you love, they don’t even get up to 500 likes when bloggers talk about them . So the controversy helps. Now it’s negative, because we live in a society where we are all hypocrites, you see, they know you can take their brand to the next level, but the bigger brands refuse to affiliate. There, the negativity tells but still it puts you on the map, where you’re almost like the biggest celebrity.”

Still on controversy, she was asked if she created controversies of they just happen to which she replied:

“They just happen! I’m very different from what you see in TV.
I can t be in this room and not speak to you. It’s not because I don’t care about you-definitely I don’t, but it’s not because I don’t care. It’s just because that’s who I am. I don’t have people skills. I don’t have friends I mingle with, I don’t club, I don’t do events, even weddings, I don’t go, so I’m a very reserved person. But I have a temper. I have an ability to go from 0-100 on you in a split second because I’m so much into myself. I don’t look for trouble so when you come at me especially in a negative way… it’s…” she paused, then continued “sometimes its just very frustrating then I give an outburst. Then people now say oh she talks too much. Sometimes its not even personal for me, it’s just play, but it happens to be that I’m controversy and I own it!” She said.

In conclusion she admitted that being controversial has it downsides as it has made her lose big deals in the past but has since grown from those ordeals. The interview then ended with words for her fans which was:

Watch the explosive 24 minute interview below:

NAFDAC Warns Nigerians Against Use Of E-cigarettes

“Why I Am Passionate About Bridging Communication Gap” – Veteran Broadcaster,…

“Why We Have A Lot Of Badly Edited Movies In Nigeria” – Nigerian Video Editor, Mark…

“You Can’t Make Money And Get Fame Simultaneously, You Have To Pick One” — Upcoming…

Tonto Dikeh Brags, Says She Has Never Failed In Leadership