Toke Makinwa Tackles Friends Who Failed To Support Her Career

Nigerian media personality, Toke Makinwa on Tuesday, June 29 took to her Instagram page to call out friends for not promoting her latest movie, Glamour Girls.

According to the actress, she has received more support from strangers than her friends since her movie came out.

The 1994 classic remake debuted on the streaming platform, Netflix on Friday, June 24.

Toke Makinwa was among the ensemble cast that appeared in the modern version of the iconic movie.

Addressing her friends who failed to support her acting career up until this moment, the media personality wrote;

Not mad or feeling entitled, just putting it out here so that when next your palm itches you to ask for my support on anything, remember you stayed silent when it was my turn.

No more what will Jesus do, pls be guided o 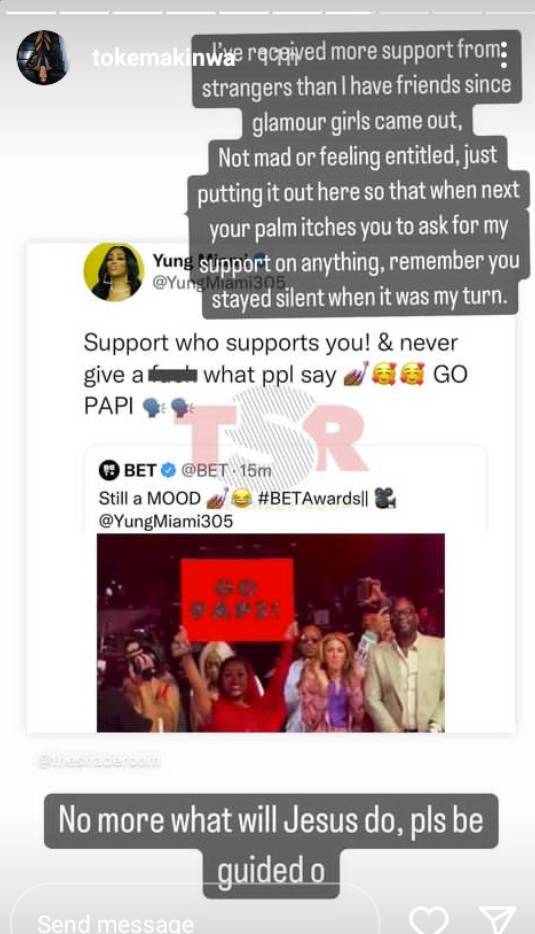 Charles Okpaleke, the founder of Play Network Studio addressed those who gave the movie a negative review in a statement on Tuesday.

“A huge shoutout to the other self-proclaimed Nollywood filmmakers and critics, who have produced numerous movies in the heads; won awards with them and even climbed the stage to make speeches, but are yet to produce any in reality. We see you, we are rooting for you! A win for one is a win for all”

Toke Makinwa Sighs, Reveals She Is ‘Tired Of Being…