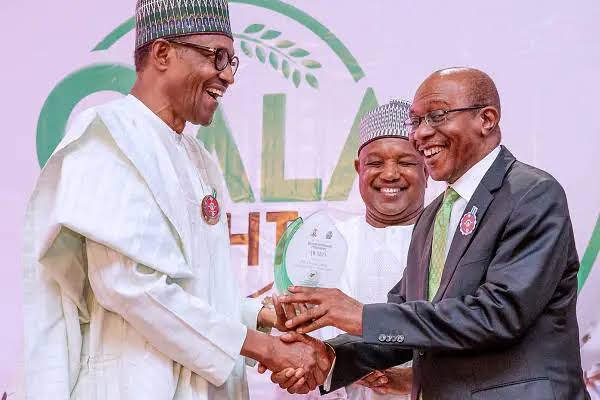 President Muhammadu Buhari has again reiterated a vote of confidence in Godwin Emefiele, governor of the Central Bank of Nigeria (CBN).

In an interview with Bloomberg, the president said Emefiele is following an alternative economic model, which Nigeria should be free to adopt.

When asked if he was concerned about the debate around the central bank’s independence following the governor’s interest in running for president, Buhari said “CBN’s board of directors [is] to determine whether a CBN governor’s actions have fallen foul of the laws”.

The CBN governor is appointed by the President. But this appointment is subject to confirmation by the Nigerian Senate.

Ultimately, it will be for the CBN’s board of directors to determine whether a CBN governor’s actions have fallen foul of the laws in place to ensure he can most effectively carry out his duties.

There is a subtext to the accusations against Emefiele and his involvement in politics, stating that the conventional model has failed in the past

Because the governor follows a model outside of the economic orthodoxy, he is labelled political. But the orthodoxy has proved wrong time and again.

Instead, the governor is following an alternative economic model that puts people at the heart of policy. Nigeria should be free to choose its development model and how to construct our economy, so it functions for Nigerians.

Upon the expiration of Emefiele’s first term as governor of the CBN in 2019, there were calls for Emefiele’s sack or voluntary exit.

President Buhari, however, sent Emefiele’s name to the senate for reappointment for another five-year term.

Upon approval, Emefiele became the very first person appointed to serve two terms as CBN governor since the return of Democracy in 1999.

CBN Gov, Emefiele, To Undergo Scrutiny By Senate Over…

INEC ‘In Talks’ With INEC Over Transport,…