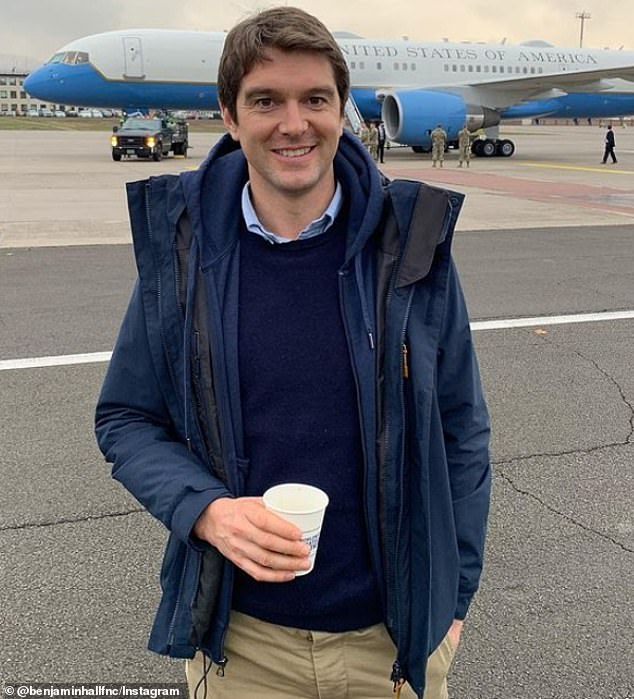 Injured FOX News reporter, Benjamin Hall has left Ukraine and is in ‘good spirits‘ two days after being wounded in the same attack that killed a cameraman and producer.

Hall, 39, was injured on Monday while reporting from the war. He was injured in the same blast that killed veteran cameraman, Pierre Zakrzewski and Oleksandra Kurshynova.

He is now out of Ukraine. Ben is alert and in good spirits. He is being treated with the best care in the world and we are in close contact with his wife and family.

Hall is British but lives in Washington DC with his wife and his three young children.

His return to the US comes as Zakrewski’s mother in Dublin speaks out about his death, telling The Irish Independent;

He was, in spite of his name, and his French mother and his Polish father, he was 100pc Irish and he objected when people didn’t believe him.

She added that he ‘always wanted to be a journalist, photographer, saving the world.’

He started off independently, you know when you want to prove yourself nobody will employ you, he had to go on his own, prove himself, bring back all kinds of film which afterwards the BBC or RTÉ or French companies would publish. He was always independent, and he worked as a freelance for Fox and Sky News and whoever wanted to employ him. Then eventually Fox got him.

The only thing which is comforting is that both his employers, Sky News and Fox, they all talk about him as exactly how he was. He was filming but he was also doing all sorts of other things and lately he was, because he spent two months in Afghanistan, he was working to get Afghans out of Afghanistan.

FOX news hosts welcomed the news of Hall’s safety on air this morning.

Another alert right now, and this is some news we’ve been waiting on. An update on our colleague, Ben Hall. He is now safe and out of Ukraine. Ben is alert and said to be in good spirits. He is being treated with the best possible care in the world. We remind you, please continue to keep him in your prayers as well as Sasha and Pierre, the news from yesterday.

Over the weekend, American filmmaker Brent Renaud was killed when Russian troops opened fire on his vehicle.

He was driving with photographer, Juan Arredondo and the pair were trying to film refugees in the Kyiv suburb, Irpin when they were shot at.

Arredondo survived the attack and was taken to the hospital.

Pressure is now mounting on US President, Joe Biden to take some form of action as he promised to do if Putin started going after Americans.

‘I’ve been clear if Russia targets Americans in Ukraine, we will respond forcefully,’ he said in February.

He has not yet taken any action beyond imposing sanctions.