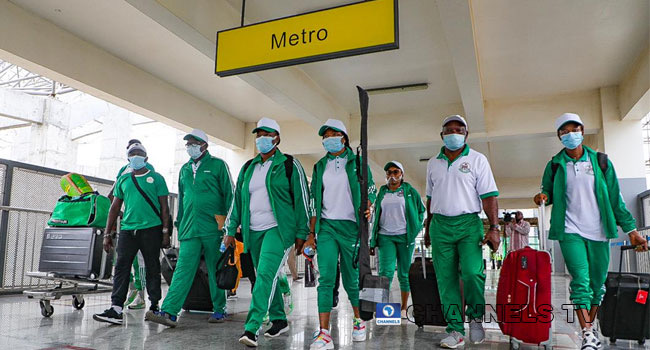 First batch of Team Nigeria contingent for Tokyo 2020 Olympics has departed for the Games on Tuesday from Abuja for the final leg of their preparations in Kisarazu, Japan.

Director, Federation of Elites Athletes Department (FEAD), Federal Ministry of Youth and Sports Development, Simeon Ebhojiaye, said this in a statement in Abuja.

The first batch that left for Nnamdi Azikiwe International Airport, Abuja immediately after a ceremony.

Ebhojiaye stated that members of the Canoeing team – Ayomide Bello and her coach Ebenezer Ukwunna, Esther Toko and her coach Regina Enofe of Rowing event alongside Secretary-General Olubunmi Oluode will depart through Nnamdi Azikiwe International Airport by Ethiopian Airline.

The athletes and their officials who have been involved in intensive training at their Abuja Camp rounded off their home leg of preparations yesterday.

The minister of youth and sports development, Sunday Dare, top officials of the Ministry and president of Nigeria Olympic Committee (NOC), Habu Gumel are expected to send forth the first batch of the athletes at Moshood Abiola National Stadium, Abuja.

Meanwhile,  Minister of Youth and Sports Development, Sunday Dare, urged Team Nigeria to avoid doping and compete in a clean manner to win medals for Nigeria at the Tokyo Olympics, while bidding farewell to athletes.

Our departure for the Games today is evidence that if we work in unison we can collectively achieve whatever we set our minds to as humans. I enjoin you to make the nation proud at the Games by competing clean and bringing glory to your fatherland.

Dare said the federal government committed a lot of resources to ensure adequate preparation that would make the athletes win medals.

He assured that plans had been concluded for President Muhammadu Buhari to also bid farewell to some of the athletes while unveiling the official Team Nigeria uniform.

The president would formally unveil the official Team Nigeria uniform for the Games during the presentation of the contingent to his excellency.

He explained that Team Nigeria will be travelling to Kizarazu city in Japan for the pre-Games training camp in four batches.

Also in the team is the SA on Sports to the Minister, Ambassador Mary Onyali, medical crew of Dr. Samuel Ogbondeminu, Messrs Okoh Joseph, Abdulsalam Shuaibu and Ekundayo Ogunkunle.

The second batch comprising athletics, taekwondo and wrestling will depart on July 13, the third batch of gymnastics and badminton will leave on July 17, while the last batch comprising male and female basketball teams departs on July 19.

These are: Athletics-22, Badminton-3, Basketball-24, Canoe sprint-1, Gymnastic-1, Rowing-1, Taekwondo-1, Table Tennis-1, Wrestling-1 which sums up to 61 and for Paralympic Games, there are; Para Athletics-5, Para Powerlifting-10, power rowing-1, Para Table Tennis-6 summing up to 22.