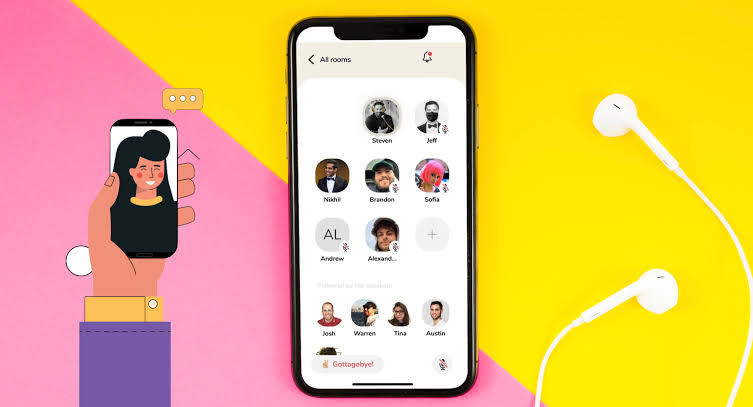 Social media platforms over the years have been streamlined to a ‘discover, download and join’ network, however, that dynamics may have changed with the emergence of Silicon Valley’s new and buzzing app, Clubhouse.

Think of a club where you are aware that there’s an ongoing party but you can only have access into the club if you have an invite because the bouncer insists it’s strictly by invitation – that’s how Clubhouse app operates.

The social app, which as at December 2020 had over 89,000 members, has brought back the spontaneity of real-life interactions, which vanished with the coronavirus and social distancing rules in various countries, giving the impression of being the next big thing.

Clubhouse, created by Paul Davison and Rohan Seth, a former Google engineer, is a platform where invited users can join different rooms for a wide range of topics. Interaction is voice-based (bye bye keyboards!) with no record of conversations kept.

Davison is a well-known Silicon Valley entrepreneur, having made the social media app Highlight in 2012. However, the app, which allowed people to share their location with others to create accidental in-person connections, shut down in 2016.

However, clubhouse which is bankrolled by venture capital firm Andreessen Horowitz as well as other investors, which only had two employees earlier this year, has now become the latest obsession.

One of the reasons Clubhouse has quickly hit the headlines is because of its exclusivity, which has at the moment created Fear Of Missing Out (FOMO) in the minds of many especially young people. This further creates curiosity among the ‘un-invited’, making it a continuous topic of discuss.

Also, it’s frequented by tech industry movers and shakers as well as celebrities. Known figures like Oprah Winfrey, Ashton Kutcher, Drake, Jared Leto and Chris Rock have either spearheaded conversations or just listened to others.

How does Clubhouse work?

On the app, users can enter into different rooms to listen or participate in a conversation. Already active users basically discuss every and anything, depending on the group.

You are able to see who else is in the room, especially people that you have followed and you can also see their profiles. The person who started the room is the one who bestows speaking privileges on participants. Other people in a room may be appointed as moderators. You can ‘raise your hand’ for the moderators to invite you to the stage- where people are able to speak – to contribute. Other people in the room not on stage are termed ‘Listeners’.

Alternatively, you can start your own room with friends or strangers, just like you would talk to a group of people at a house party.

A major thing that sets Clubhouse apart from social networks like Twitter, Instagram, and Facebook, is that once you join a room, you don’t have to stay on the app. You can listen to conversations in the background, while going about your daily activities. A CH (like Clubhouse is fondly abbreviated) user can multitask outside the app while still participating in discussions on the app.

Also, unlike most social media apps where you can catch up on the day’s news after the day, with Clubhouse you have to be there to avoid missing out as none of the conversations are recorded.

It’s all ephemeral. It creates this cool urgency.

This both encourages people to spend time on the app, and also makes time spent on Clubhouse feel more like face to face conversations.

Clubhouse, as at May, raised a Series A funding round from Andreessen Horowitz, Forbes reports. It is said that the deal that includes $10 million in primary capital and at least $2 million in secondary shares, valuing the company at or just above $100 million, per the sources.

Forbes at the time said it was unusual for a company of its size and maturity to amass such funding but has over time proven itself worthy before venture capital investors and the technorati set.

Venture capitalists and other Silicon Valley insiders frequent the app, and investments from Andreessen Horowitz and other top investors pushed the company’s valuation to $100 million just a few months after its debut in the beginning of the year.

There has been some speculation that, depending on how Clubhouse, being in the beta-testing state, may be less appealing if it goes public.

At the moment, exclusivity is the driving force of interest in the app, and the rooms being smaller is part of what has made it compelling. It is said that this could change if the app becomes more open for all. As a result of this, Clubhouse, as earlier stated, has only over 89,000 members around the world.

Despite remaining invitation-only app which only just launched earlier this year, the app has already seen its fair share of criticism over its lack of moderation policies.

Though, the app initially had no guidelines and was faced with misinformation and harassment between users, its founders eventually created community guidelines. With that, each room can also create customisable “club rules”, block users, or report an incident.

However, there are still cases of misinformation and use of provocative words as experienced sometime in September where anti-Semitic content where being said in a room, Bloomberg reports.

Among the hundreds of listeners in the room during the contentious discussion were Clubhouse backers Marc Andreessen and Ben Horowitz.

Notwithstanding the complaints, many youths are yearning to become users of Clubhouse. You can go to the App Store and download it to reserve your username, but without text invite from someone who has your personal phone number, you cannot use the app yet.

It is however important to note that it is currently only available for iPhone users. According to research, the existing CH app on Android is a clone of the original one. The developers have said the app may become available for all in nearest future. But not to worry! you as an iPhone user can download it anyway. You just might get an invite soon.