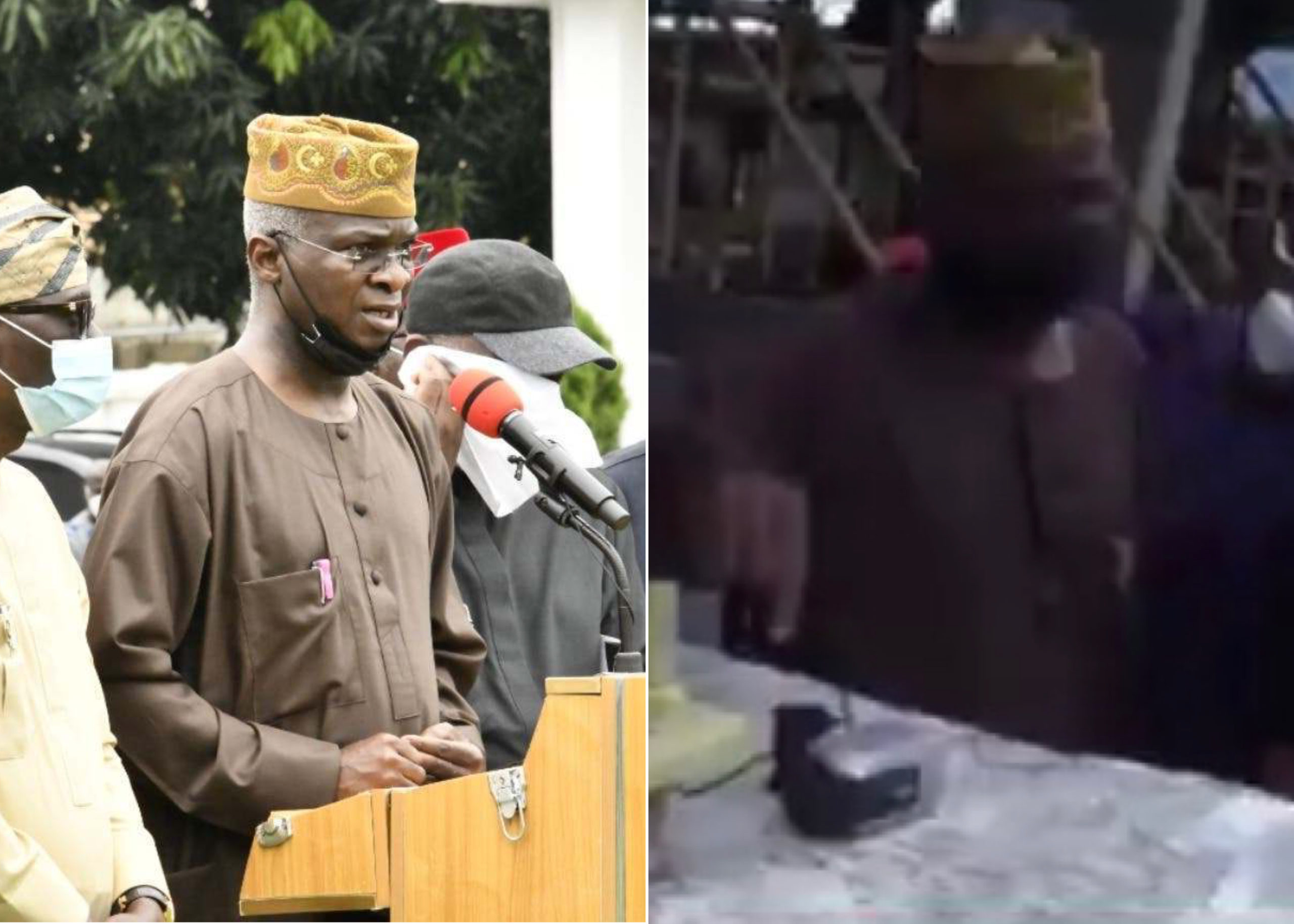 Discovery of a mystery camera at the Lekki Toll Gate, Admiralty Circle, in Lagos state on Sunday, October 25 by Minister for Works and Housing, Babatunde Fashola have sparked reactions from many Nigerians.

Fashola, led a Federal Government delegation of South-West governors and ministers on the directive of President Muhammadu Buhari to commiserate with the Lagos State Governor, Babajide Sanwo-Olu over the loss of lives and destruction of properties in the violence that rocked the state last week.

Fashola who discovered the camera during an on the spot assessment at the Lekki Toll Gate, subsequently, handed it over to Sanwo-Olu for forensic analysis and further investigation.

He said the camera must have been planted by some subversive elements priory to the reported shootings for ulterior motives.

However, many Nigerians have expressed reservations over the discovery. Some believe it’s just an act put up by government officials to cover up the Lekki tollgate shooting incident by producing a ‘fake video’ of what happened that night.

Other Nigerians found it strange that Fashola could discover the mysterious camera days after the cleaning up of the location by Lagos Waste Management Authority (LAWMA), who didn’t discover anything.

Watch a video of Fashola picking up the camera below;

I love Fashola ooo.. next time, daddy should look at the script very well before he acts. That’s a terrible acting. So no one saw that camera for days, not even lawma. Omo, they no rate us true true

I had second hand embarrassment for Babatunde Raji Fashola last night.
APC turned my favorite person in the entire party to a moron in the name of pulling Sherlock Holmes.
I mean, that toll gate was cleaned by Lawma, and even Arise TV has a clip where ‘iron condemn’ cleared up

These guys no rate us one bit!

Babatunde Fashola finds camera in Lekki Toll Gate after 5 days even Raymond Redington no do reach like this. #EndSARS pic.twitter.com/2XhRz6PwFt

Since Agent Fashola Reddington discovered the mysterious CCTV camera at Lekki Toll Gate, he should be deployed to Sambisa to uncover the perpetrators. A National Hero!

Fashola miraculously finding a camera at the Toll Gate and not being ashamed about it just goes to show how people in government see us, and it explains why they rule the government the way they do.
They think we are idiot and fools because you’d only try to pull this on a fool.

Good morning o…
Can’t find your wife?
Your Car is missing?
Looking for your period?
I present to you Detective Fashola, the number plug for all things discoverable. No crime scene is too big…..no camcorder is too small.
Commander in chief of Crime scenes.
Ebube Detector pic.twitter.com/pWqbx3TruL

– FBI Agent Fashola discovers a camcorder at the crime scene

So Special Agent Sherlock Fashola Holmes led his squad to a crime scene and found a camera in a conspicuous spot after Lawma cleaned the scene.
Baba even used handkerchief to pick the camera. pic.twitter.com/4UHa2anA0h

Fire raged and burnt everything

Suddenly! In a twinkle of an eye, Inspector Fashola found camera, even used cloth to pick it so as not to tamper with evidence

Some private volunteer citizens also went to clean up the Lekki Toll Gate, they never found a secret camera.

Fashola leads a troop of clowns to the crime scene and suddenly secret camera appears.

How Fashola and his crew “conveniently” found a camcorder during their manipulative inspection of the Lekki Toll Gate. #EndSARS #EndBadGovernanceinNIGERIA #BuhariResign pic.twitter.com/NxfpmJUYgC