The Church of Satan has reacted to Hollywood actor Christian Bale’s tribute to Satan after he was awarded Best Actor at the 76th Golden Globes for his portrayal of former Vice President Dick Cheney in the film ‘Vice. 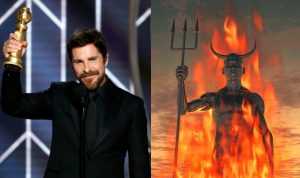 While accepting his award, Bale said

‘Thank you to Satan for giving me inspiration for playing this role,’ . 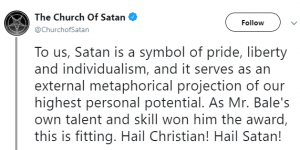 Reacting to Bale’s acceptance speech, the Church of Satan wrote on Twitter,

“To us, Satan is a symbol of pride, liberty and individualism, and it serves as an external metaphorical projection of our highest personal potential. As Mr. Bale’s own talent and skill won him the award, this is fitting. Hail Christian! Hail Satan!”