Three teenage boys have been arrested for stabbing a 15-year-old Nigerian rapper identified as Jordan Gbolade Jaiyeola, following a fight that broke out after the deceased’s birthday party at a community centre in east London. 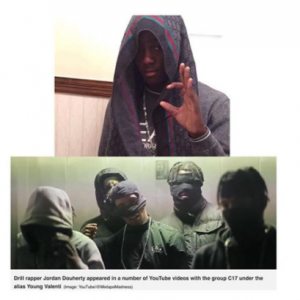 The Nigerian rapper known locally as Jordan Douherty, was found with knife wounds and died at the scene, and the arrested suspects were taken to separate police stations for questioning.  Friends screamed “he’s dead” and “they’ve killed my best friend” as groups of teenagers “scattered” following the attack, witnesses said.

A witness who gave her name only as Carol said;

“it was chaos out here last night” and described hearing friends of the victim screaming and sobbing.

She told the Press Association: “Around 9.20pm I heard a lot of noise going on. For some reason it didn’t sound right. It was mostly black boys out there.

“Then I heard a lad crying down the phone ‘he’s dead, he’s dead’.

“He was lying down in the road, there was a lot of blood. The police were working on him, they tried their absolute damnedest with that boy last night.”

A teenager, who saw the aftermath of the attack and gave her name only as Ellie, added:

“There was a big group on the corner with just the boy on the floor.

“There were paramedics doing shocks and CPR on him for quite a while. The best part of an hour. After, he was just laying there with a white sheet over him, it was covered in blood.”

The Sun reported that the aspiring rap star appeared in a number of YouTube videos with the group C17 under the alias Young Valenti. Their lyrics reference gang and knife violence, rapping about using “skengs” and “shanks” (knives) to “dip” and “splash” (stab) their “opps” (gang rivals).

MTN, The Duke Of Shomolu And The Super Eagles