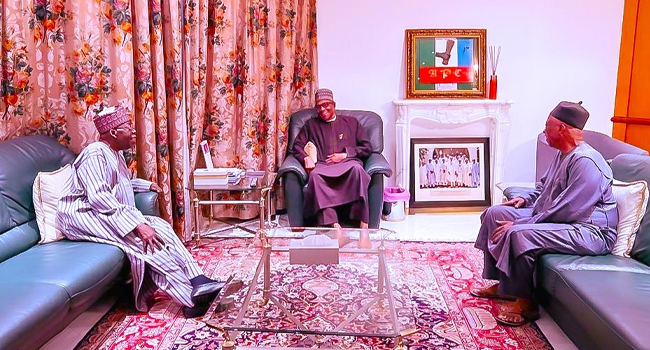 Following the arrival of President Muhmmadu Buhari yesterday evening from London, Presidential candidate of the All Progressives Congress (APC), Asiwaju Bola Tinubu had a meeting with him

Tinubu was accompanied to the meeting by APC National Chairman, Senator Abdullahi Adamu, according to a photo shared by the Special Assistant on Digital Communications to the President, Bashir Ahmad.

The meeting held hours after Buhari returned from a two-week medical vacation in London.

The President’s official jet touched down at the Presidential Wing of the Nnamdi Azikiwe International Airport, Abuja around 7pm on Sunday.

While opposition parties like the Peoples Democratic Party (PDP) and the Labour party have since launched their campaigns for the 2023 elections, the ruling party is yet to officially flag off its presidential campaign, apparently awaiting Buhari’s return from London