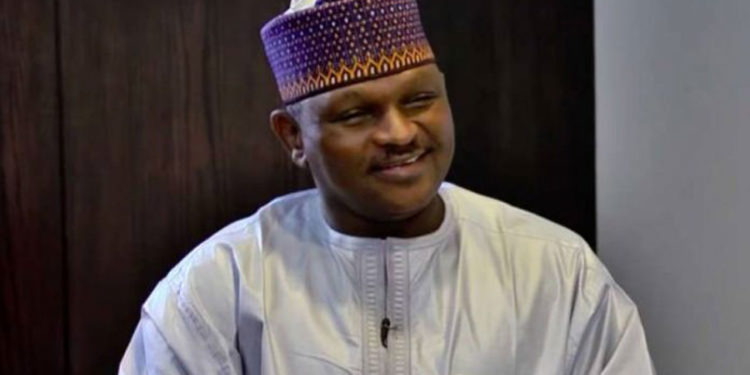 Former Chief Security Officer to late military dictator Sani Abacha and presidential candidate of Action Alliance, Major Hamza Al-Mustapha (retd.), on Tuesday has expressed concerns that following the influx of arms and hard drugs in the country, Nigeria might be sitting on a keg of gunpowder that could go off any moment.

This is even as Al-Mustapha warned that the next leader of the country, who would take over from the President, Major-General Muhammadu Buhari (retd.) must have a shock absorber.

The AA presidential candidate gave the warning in his keynote address at a roundtable discussion on “Contemporary security challenges and their effects on 2023 general election” in Abuja on Tuesday.

Al-Mustapha’s warning is coming barely 24 hours after the children of late Kudirat Abiola released a statement, saying their mother was killed on his orders.

The release, which was signed by Khafila Abiola on behalf of Kudirat’s children, was a reaction to a statement attributed to the former aide of Abacha, where he claimed that the incumbent Vice President, Yemi Osinbajo, coerced Sergeant Barnabas Jabila aka Sergeant Rogers, to implicate him at the 1998 Oputa panel.

An emotional Sergeant Rogers had confessed at the panel to have taken part in the assassination on Al-Mustapha’s directive.

Although he was sentenced to death in 2012, Al-Mustapha was eventually allowed to walk free by a court of appeal in Lagos.

But Al-Mustapha, who has spent the last few years striving to right his wrongs, raised alarm on Tuesday over what he called proliferation of arms and hard drugs coming to Nigeria ahead of the 2023 general election.

While stating that the trend posed some sort of danger ahead of the 2023 elections, the soldier-turned-politician disclosed that Nigerians needed to start asking questions on whether the cache of arms were meant to reinforce the act of insurgency or foment violence ahead of next year’s poll.

According to him, several victims of insurgency are still littered all across the country with little or no attention from those who should care.

There are leadership deficit in Nigeria at all levels. The next leader of this country must have shock absorber because this country is sitting on a keg of gunpowder.

As of today, all the agencies in Nigeria and I’m sure the representative of the Inspector General of Police, if he’s aware of what I’m going to talk about, new discoveries of movements of drugs, arms, are coming into Nigeria through numerous borders and in large quantities. I’m talking of now as I speak. But I’m sure the society is not aware.

The question is at whose instance are these new weapons coming in? Why the increase? Are the arms and drugs for insurgents? Who are the sponsors? Is it politicians? Can 2023 election hold? Has friction started between political parties and candidates and their supporters? Is it a threat for the moment or the future?

This is as at now the major issue in the laboratory of national security management of Nigeria, as of now that I talked to you.

2023: Wike’s Logistics Support To Tinubu Not Useful, Votes Are Needed Instead — Gov Umahi