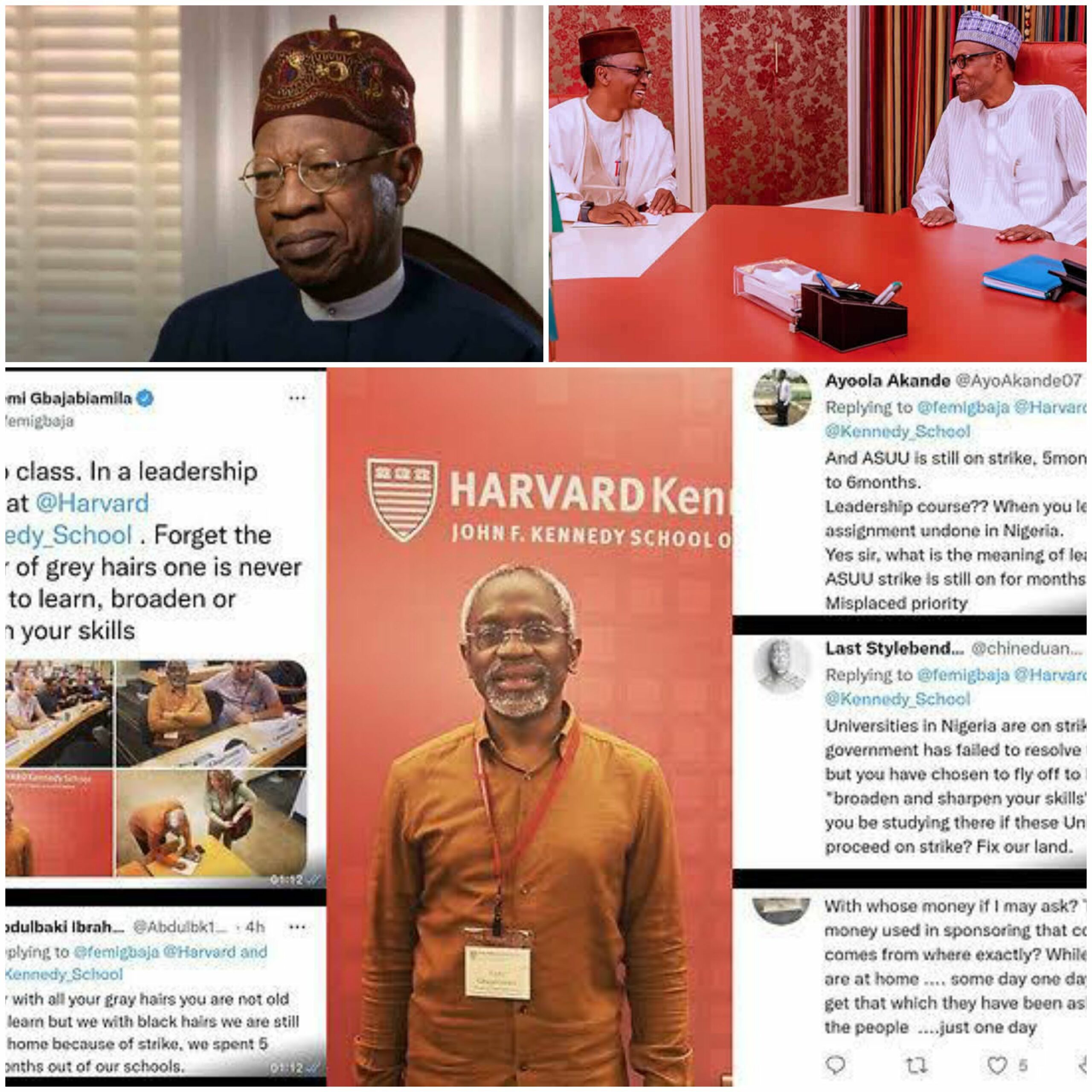 The Federal Government of Nigeria, via Minister of Information, Lai Mohammed has disclosed it will sanction the BBC and Trust TV, a television owned by Media Trust Group, over their stories on bandits in the northern region of the country.

However, speaking with journalists in Abuja on Thursday, Minister of Information and Culture, Lai Mohammed, said the documentaries promoted terrorism in Nigeria.

With the indifference and seeming complicity being display by the Federal Government over the spiralling insecurity, it is facetious for Lai Mohammed to threaten sanctions over the exposé on the terrorists except there is something the authorities are scared of.

Speaker of the House of Representatives Femi Gbajabiamila has apologised following the criticism he received for sharing photos of himself attending a leadership course at Harvard University in the United States.

Gbajabiamila posted photos of himself receiving lectures at the university on Tuesday, while members of the Nigeria Labour Congress staged solidarity rallies nationwide in support of the Academic Staff Union of Universities (ASUU) over unresolved issues with the Federal Government that has led to the shutdown of public universities for more than five months.

The Speaker who was accused of being indifferent to the plight of Nigerian students currently unable to attend school due to the face-off between lecturers and the Federal Government, however, later apologised while conceding that his tweets were insensitive.

Cancel culture, oftentimes, is counterbeneficial in the grand scheme of things but the swelling discontent amongst angry Nigerian students over the prolonged strike by the ASUU led to the vitriol against Gbajabiamila over his tactless tweet.

This ought to be a fillip needed to rectify the situation which Gbajabiamila, in his lengthy apology to the students, pledged to discuss with the striking lecturers. Lessons learned for the lawmaker, I hope!

Governor El-Rufai, while speaking on a Radio Programme, on Wednesday night, July 27, said he had been warned to be careful.

This is why I met with the president on Sunday and told him about these problems. I also told him about the video because up to that day, he was not even aware. I told him and the following day, Zamfara State governor, Bello Matawalle also confirmed to him that he saw the video too, so as to take action.

There was a deafening lack of reaction after the revelation by El-Rufai about President Buhari’s presumed ignorance of the activities of terrorists, who had threatened to kidnap the President and the Kaduna State Governor.

The daredevil manner of terrorists’ attacks across the country has rekindled speculations about the complicity of the elite — who are allegedly raking billions in security funds — in the malaise. Sad for the helpless citizens!

Governor of Rivers State, Nyesom Wike, has reacted to a recent interview by the 2023 presidential candidate of the Peoples Democratic Party (PDP) Atiku Abubakar, saying the former vice president lied about consulting him before naming Delta State Governor Ifeanyi Okowa as his running mate.

Wike, who fielded questions from journalists at the Port Harcourt International Airport shortly after his arrival from Spain on Friday, described Atiku as a serial liar.

I told my special adviser on Media that I am going to speak on issues. We know in this part of our world when lies are being contorted, it becomes a fact.

The ongoing wrangling between Wike and Atiku over the PDP Presidential ticket is a perfect example of egos clashing at the detriment of preset goals, and the major opposition party must find a way to rally the ranks in order to stand a chance against the ruling All Progressives Congress in the 2023 elections.

Some Senators under the platform of the Peoples Democratic Party (PDP) on Wednesday demanded for the impeachment of President Muhammadu Buhari over the prevailing insecurity situation in different parts of the country.

The development was not unconnected with the rising insecurity in the country and the failure of President Muhammadu Buhari to proffer solutions to the current insecurity.

The Senate Minority Leader, Philip Aduda, who addressed journalists at the National Assembly complex, noted that the one of the resolutions taken at the session was for the Senate to discuss the issue of insecurity in the country and efforts taken to check the scourge.

We agreed in the closed session that we will give President Muhammadu Buhari an ultimatum, but the Senate President, Ahmed Lawan, didn’t want us to raise the issue.

The duplicity of the lawmakers was brought to fore due to the imminent threat on their lives after multiple terrorist attacks on Abuja; one wonders why it took so long for them to be jolted into action.

Nonetheless, this only reinforced the notion amongst the citizenry about the lack of concern by the politicians and authorities to tackle the menace.

Make no mistake; Buhari will see out his tenure and there will be more terrorists attack in the future.