The latest development also comes few hours after clinching the ticket as the factional flag bearer of the party.

He, hence, stepped down after he received ultimatum from the Ohanaeze Ndigbo Youth Council (OYC) Worldwide led by Mazi Okwu Nnabuike to withdraw from the contest.

Movement for the Actualization of Sovereign State of Biafra (MASSOB) also issued an ultimatum.

Recall that Obi earlier on Monday, May 30 was declared the presidential candidate of Labour Party. This was at Labour Party’s Convention as well as presidential primary held in Asaba, Delta State.

Professor Pat Utomi, a professor of political economy and co-convener of the National Consultative Front (NCFront); as well as 45-year-old Joseph Faduri had stepped down for him.

However, a faction of Labour Party on Wednesday, June 8 produced Mr Jude Ezenwafor; as its Presidential candidate of the party for the 2023 elections.

Giving an update, Ezenwafor revealed his decision via a letter; which is not dated and addressed to the national leadership of his faction of the party.

In the letter which is currently being circulated online, Ezenwafor stated that his decision to withdraw was personal and appealed to his supporters to understand him.

I hereby withdraw from the forthcoming Presidential Election in 2023. After consulting my supporters Nationwide, I decided to withdraw for personal reasons. I regret any inconvenience my withdrawal might cost our great Party. I thank the leadership of our great Party for giving me the opportunity to serve Nigeria. 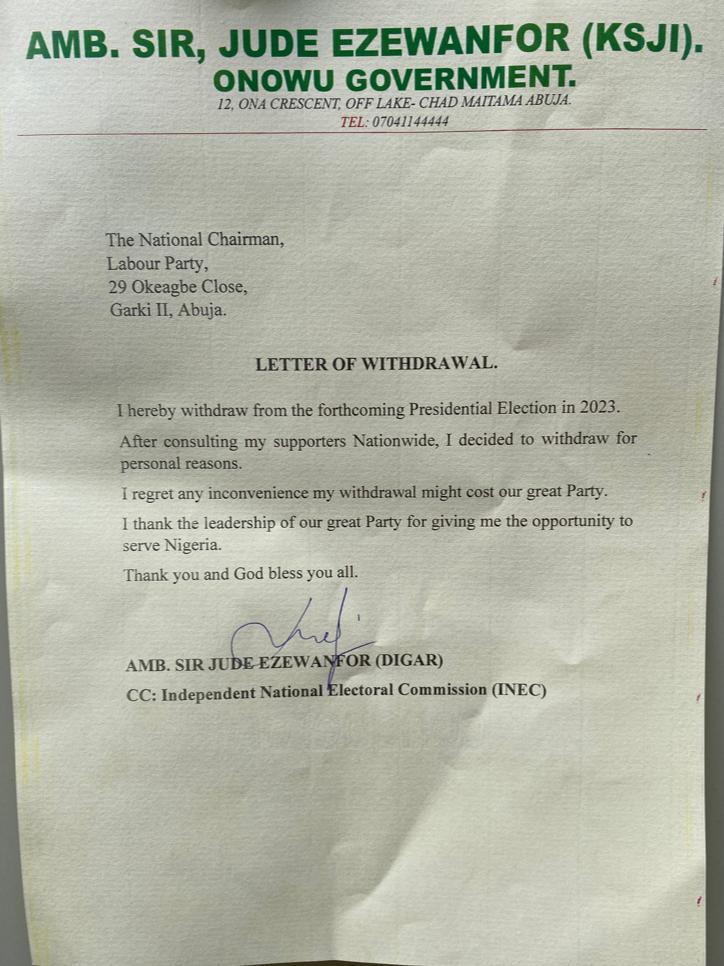 The latest development now means the coast is now clear for former Anambra Governor and Presidential candidate of the party, Mr. Peter Obi.

Reacting to the news in an interview with DailyPost, the President-General of OYC, Mazi Okwu Nnabuike said the letter of withdrawal was not enough, stressing that;

Ezenwafor should do a broadcast for us to be convinced. He can disown the letter at any time.

In other news, Nigeria Labour Congress (NLC) on Thursday said it only recognises the Labour Party faction that produced the former Anambra State Governor, Peter Obi as its presidential candidate.

National President of the NLC, Ayuba Wabba made this known in a statement, saying any faction opposing Obi is not recognized.

NLC as well as TUC are aware of only one presidential primary which was held in Asaba, Delta State on 30th May 2022; and also produced HE Peter Obi as its presidential candidate and standard-bearer. 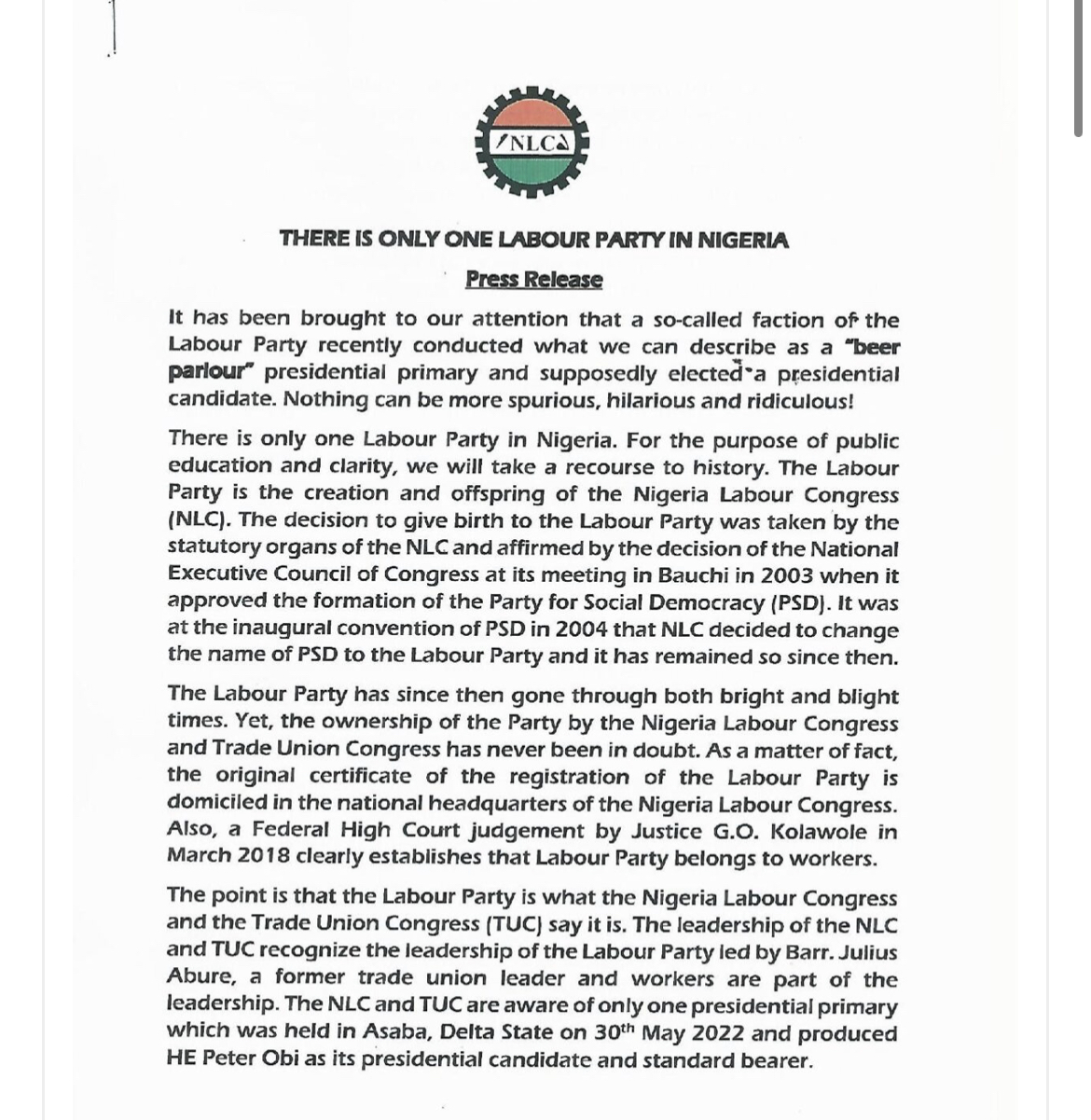 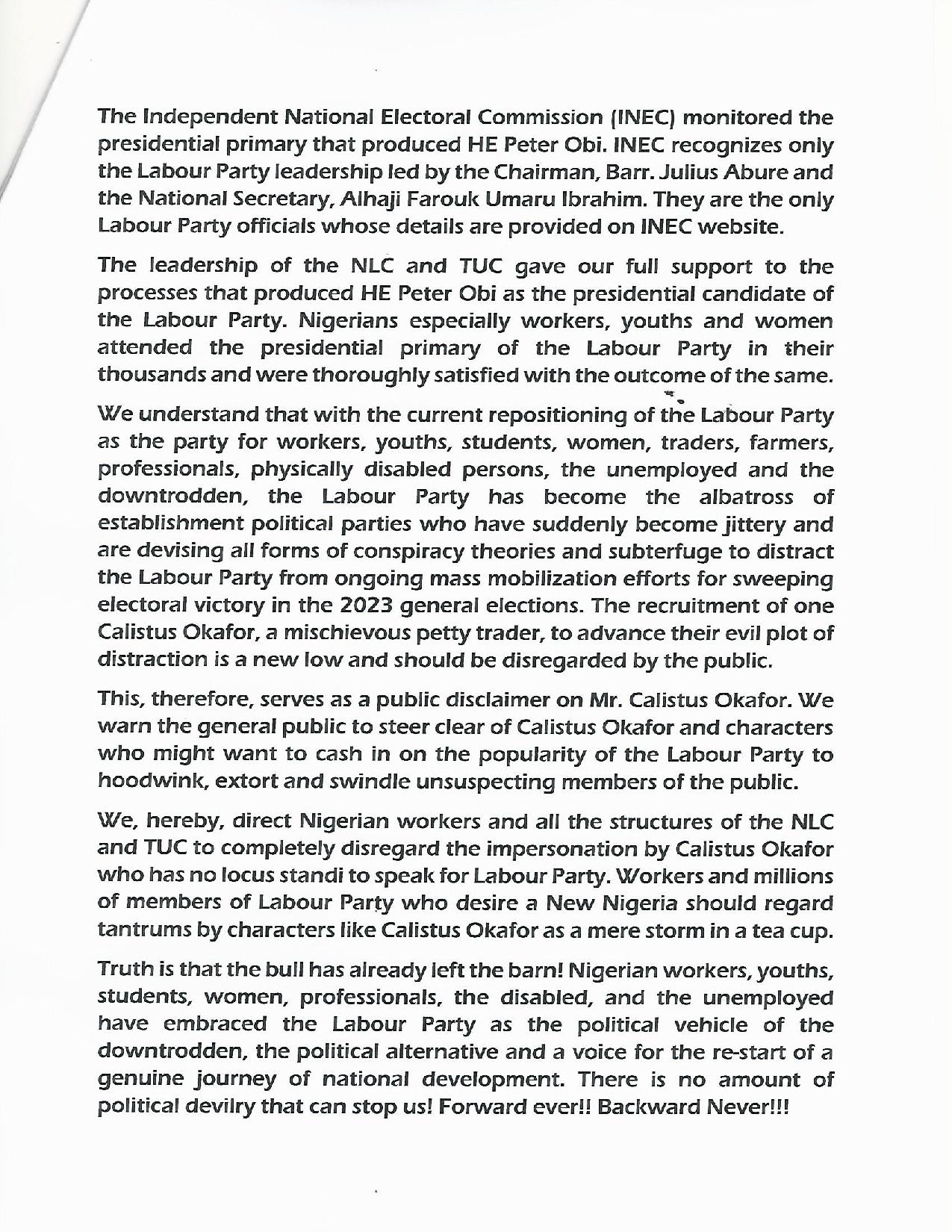 Wizkid Explains Why He Prefers To Be ‘Underestimated’