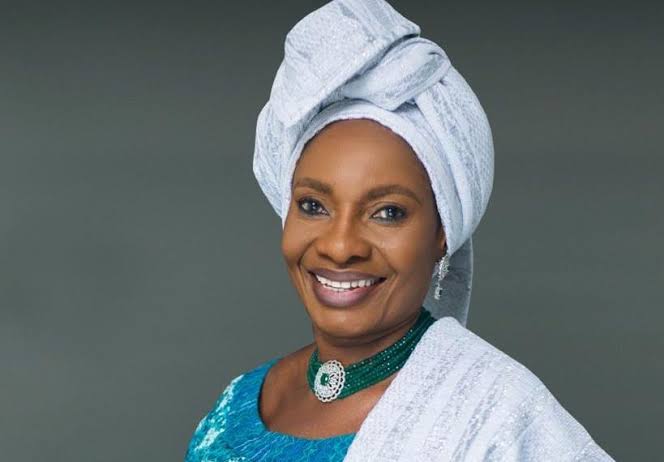 Minister of Women Affairs, Helen Tallen, has on Monday, May 16 withdrawn from the 2023 Senatorial race to retain her ministerial position.

The minister, who had purchased the All Progressives Congress form to contest the Plateau South Senatorial election, has now rescinded her ambition.

Tallen had purchased the All Progressives Congress (APC) form to contest the Plateau South Senatorial election.

According to her, after consultations with her constituents, she has decided to withdraw from the race.

With profound gratitude and great humility, I have decided to voluntarily step down from the Senatorial race sequel to the yearnings of Women and other well-meaning Nigerians who see the need for a strong voice for Women at the Senate having consulted widely with my family, well-wishers and supporters conscious of the role I play for women in Nigeria today!

So to all Nigerian women and young girls who have raised concerns as to what next, rest assured that I, Dame Pauline K. Tallen, OFR, KSG have not submitted any resignation letter and therefore, it is my decision not to go ahead with this request but carry on as the Minister of Women Affairs.

Furthermore, mindful that the Constitution of APC stipulates in Article 31 (1) (iii) (October 2014 As Amended), that: ‘Any Party Officeholder interested in contesting for an elective office (whether party office or office in a general election) shall resign and leave office 30 days prior to the date of nomination or party primary for the office he or she is seeking to contest aspiring to any office must have resigned his/her appointment days’. It will therefore be a breach to resign office at this time since this was not done ahead of the stipulated timeline.

Tallen noted that she came to the decision after consultations with her constituents and thought it wise to withdraw from the race.

I remain resolute as I continue to relish the opportunity to serve Nigerian Women in my capacity as Minister of Women Affairs under the able leadership of President Muhammadu Buhari.

Consequently, I wish to inform you all that following broad-based consultations and interventions from critical stakeholders, I have decided to withdraw from running for the senatorial seat, mindful of our accomplishments and the notable progress we have recorded under my stewardship at the Federal Ministry of Women Affairs.