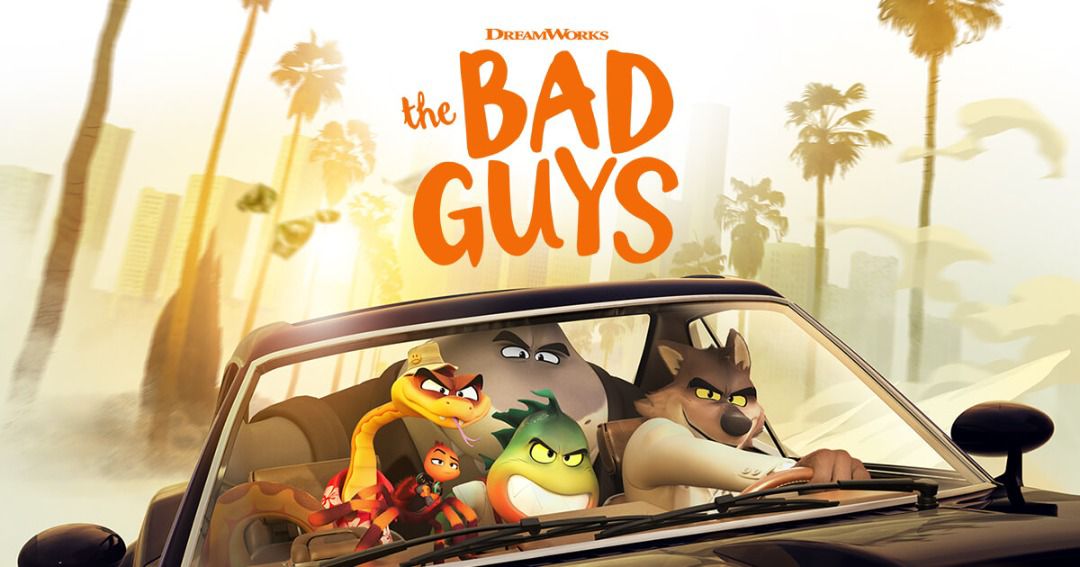 Welcome to the incredible world of the Notorious Gang of Five as presented in DreamWorks’ latest animation – The Bad Guys.

Mr. Wolf is the Lord of pickpockets. Ms. Tarantula, aka “Webs” is the razor tongue unbeatable hacker. Mr. Snake has seen it all. Mr. Piranha is the thin-skinned “muscle.” Mr. Shark is the wizard of deception. 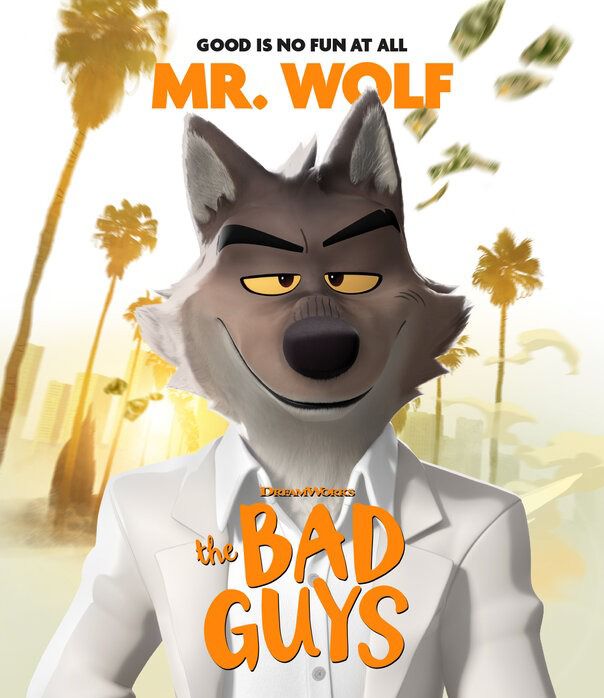 After a long time of making away with peoples’ possessions, this infamous gang is caught. But the ringleader, Mr. Wolf has got something more up his sleeves. He’d see to it that his friends do not know the pain of prison. Under the training of professor Marmalade, guinea pig, the gang aims to trick everyone into believing that they have turned away from bad ways.

Mr. Wolf soon realizes that he finds acceptance while pretending to be good. A new baddie is now in town. Will Mr. Wolf ever be able to convince his friends to stop being The Bad Guys? 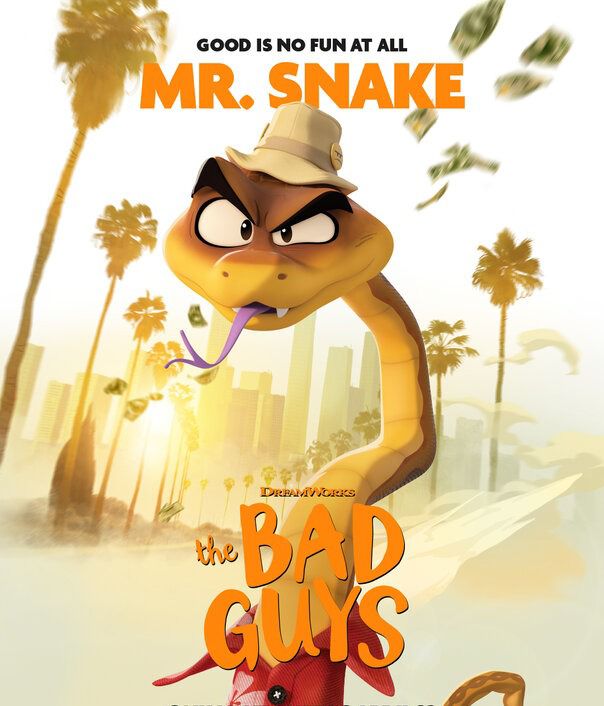 The last time we saw something brave in the universe of animation was four years ago when Spider-Man: Into the Spider-Verse broke down famous barriers with earthshaking moves in terms of characterization, experimentation, and animation ingenuity.

It is no thus an overstatement that in recent times DreamWorks, one of Hollywood’s gods of animation did a seismic tweaking to story and animation feel of The Bad Guys’s 3D effect and 2D blend making this animation realistic without losing the animation touch that endears it to young and adult audiences alike.

Realism and style are the new way and this movie offers us both without fear of falling short of expectation. You begin to feel as though the scenes and characters were hand-drawn while you are also able to see the bold handwriting of CGI expert manipulations. This animation is not the usual plastic Hollywood’s CG affair; it’s bold; it’s wired; it’s experimental; it’s exciting.

Perifel did not come on board as a novice in animation, this only happened to be his feature-directing debut. For someone who has had such experience with successful animation, you can’t second-guess the amount of work he has put into this particular one.

You are therefore assured of not just eye-friendly scenes but alluring sound that sets off family fun from the get-go. Sam Rockwell makes a huge impact voicing wonders in the wolf. Ayoade’s voice rolling out of a pig would leave you suspended in awe. 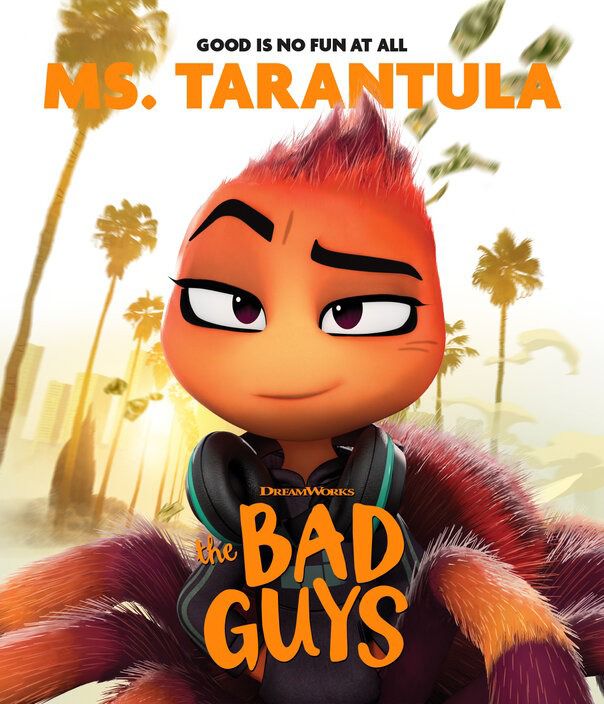 Other skillful hands on this franchise are: Damon Ross and Rebecca Huntley (producers who have had a lot to do with The Boss Baby), while Etan Cohen, Aaron Blabey, and Patrick Hughes are the executive producers.

The Bad Guys is a purely entertaining and didactic visual comedy that puts on display a host of crazy characters that are as funny in their speeches as they are in special traits.

Piranha can’t help farting anytime he lies. This character is subtle echo of Pinocchio whose nose gets longer anytime he lies. The Snake has got a handcuff to wrestle with around his neck instead of his hands. Given that snakes are not supposed to have hands. The animation is speedy, funny, and promises to open even blind eyes to the humorous sides of ordinary details.

Aaron Blabey’s graphic novel of the same name is the inspiration behind this cinematic creation. The blockbuster bestselling book series has over 8.2 million printed copies worldwide. You can only expect the cinematic adaptation of the illustrated cartoon book series to shatter box office figures around the globe as well.

It is no longer a secret that people who have had encounters with Blabey’s children’s stories can’t wait to see what this particular one would look like on the big screen.

Even children who have never set a finger on the book series are eager to encounter this animated gang of baddies who are humorously on their way to becoming goodies with slick twists and turns here and there.

The animation film is already enjoying positive reviews around the globe. Slaine Dale, a very mesmerized critic, after seeing the movie could not help but write;

I like how for this movie, DreamWorks chose to have a more cartoony style instead of their usual realistic animation (though I guess it looks like that in the book). It has likeable characters, especially Wolf, Snake, Tarantula, Shark, Piranah, Diane and Marmalade was an interesting villain because I was half expecting him to be the real villain, but the other half of me thought he was genuinely nice. It also has some surprising twists I wasn’t expecting but enjoyed. Anyway, I really enjoyed this movie and is definitely one of my favorites from DreamWorks.

Kotal Kahn writes of the movie;

The story line is awesome as well as the characters too. I recommend this to everyone.

Watched this movie today at the cinema with my daughters. Was totally entertaining, funny, with a great story line. Best animated movie I’ve watch in years. 100% recommended !!

Guy Lodge believes that parts of the spell-holding alure of the film are entrenched in the craft of creation itself highlighting the music and other elements, “the chief incidental pleasures of “The Bad Guys” are craft-based, from its disciplined, suitably Californian palette of burnt oranges and canine tans, to the brassy exuberance of Daniel Pemberton’s working-overtime score, full of sonic callbacks to ’70s heist-movie funk.

The Bad Guys is set to be distributed around the world by Universal Pictures though it’s already out in Israeli cinemas. It will be distributed in West Africa by Silverbird Film Distribution come 15th of April 2022. You cannot afford to miss the thrilling cinematic experience of an action- packed animated crime comedy.