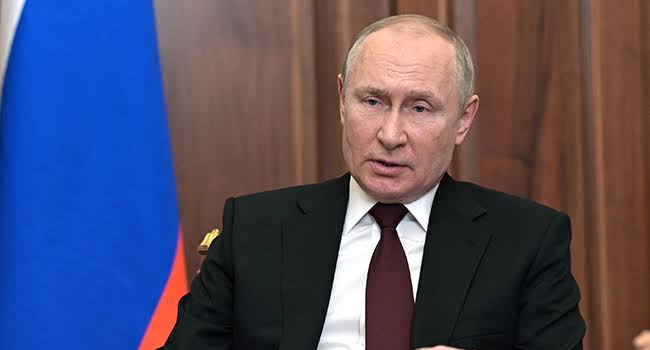 Russian President, Vladimir Putin has ordered the deployment of troops to two breakaway regions in eastern Ukraine after recognising them as independent on Monday, accelerating a crisis the West fears could unleash a major war.

His two decrees were published on the Russian government’s legal portal after a televised address late Monday.

The Russian President laid out grievances about the West’s support of Ukraine after the collapse of the Soviet Union and Western arms deliveries to Kyiv against the backdrop of a massive Russian troop buildup near its borders.

He also instructed the defence ministry to assume “the function of peacekeeping” in Donetsk and Lugansk republics.

Mr. Putin said the unspecified number of Russian forces would act in a peacekeeping role once Russia has signed mutual assistance with the two regions.

“The situation in Donbas is becoming critical,” Mr. Putin said of the eastern area of Ukraine, where the two breakaway regions are located. “Ukraine is not just a neighbor. It is an inherent part of our own history, culture and spiritual space,” he said.

Moscow provided no details or date for any deployment, with the order only saying that it “comes into force from the day it was signed”.

Russia has moved tens of thousands of soldiers to regions near Ukraine’s borders, with the West saying Moscow plans to use them for an attack at any moment.

In the same document, Putin also ordered his foreign ministry to “establish diplomatic relations” with the “republics”.

The agreement, published by Russia’s lower house of parliament, “creates a legal basis for the presence on the territory (of the two regions) of Russian military formations, whose presence is necessary to maintain peace in the region and ensure reliable security”.

Both sides agreed to share military bases and jointly protect their borders, it said.

Earlier on Monday, the Russian leader demanded that Kyiv halt all its military operations against Moscow-backed rebels in eastern Ukraine, or face more bloodshed.

Putin recognised the Donetsk and Lugansk separatist republics on Monday, despite repeated Western warnings that this would result in sanctions.

And in a late-night speech to the nation, Mr. Zelensky said Russia’s latest actions amounted to a breach of Ukrainian sovereignty, but he continued to urge calm in the face of the threat.

Truth is on our side. We will never hide the truth from you. As soon as we see a change in the situation, as soon as we see an increase in risk, you will know all about it. There is currently no reason for chaotic actions.

Condemnation from the international community was swift.

Mr. Biden also “reiterated that the United States would respond swiftly and decisively, in lockstep with its Allies and partners, to further Russian aggression against Ukraine.”

Mr. Biden issued an executive order that “will prohibit new investment, trade, and financing by U.S. persons’’ in the breakaway areas.

Monday’s order bans new investment and financing in the separatist regions and U.S. trade with the areas. Investors or company executives that do business with the breakaway areas will have their U.S. assets blocked.

Press secretary Jen Psaki said the White House would also announce additional measures. She said those moves would be in addition to economic measures the U.S. has been preparing with allies.

News of Mr. Putin’s decision to recognize the self-proclaimed republics of Donetsk and Luhansk, which is expected to include financial assistance and help with infrastructure development and security, was greeted with cheers on the streets of the breakaway territories.

The celebrations came as Ukraine asked the U.N. Security Council for an urgent meeting to tackle the threat of a Russian invasion.

The Security Council, whose rotating presidency is held by Russia this month, met Monday night on the Ukraine crisis.

Despite facing criticism over its action from most members, Russia’s veto power on the Security Council appeared to shield the country from significant U.N. trouble.

The United States will impose sanctions on Russia for this clear violation of international law and Ukraine’s sovereignty and territorial integrity, U.S. ambassador to U.N. Linda Thomas-Greenfield said after the Security Council meeting.

Mr. Putin accused Ukraine of taking a hostile stance toward Russian-controlled areas of Donbas and said the government in Kyiv wasn’t willing to implement the Minsk cease-fire agreement signed after Ukrainian forces were routed in Donbas in 2015.

Ukraine has rejected Moscow’s interpretation of the deal, which it says provides Russia’s proxies in the region a veto over any attempt to align Ukraine more closely with the West.

The Russian leader also repeated his objections to Ukraine being allowed to join North Atlantic Treaty Organization (NATO) saying that Kyiv would use it as an opportunity to forcibly try to retake the Crimean Peninsula, which Moscow annexed in 2014.

If Russia faces such a threat as the admission of Ukraine to NATO, then the threats to our country will increase.