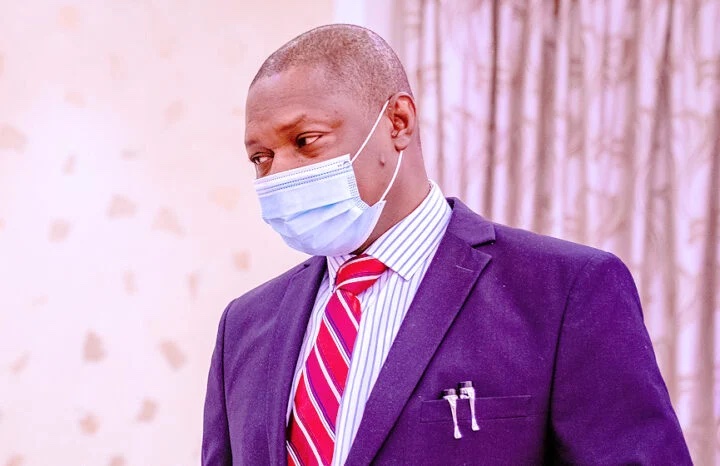 Abubakar Malami, attorney-general of the federation (AGF), has refuted the claim of a suspect arrested in connection with the raid on the home of a justice of the Supreme Court, Mary Odili.

On October 30, security operatives — made up of soldiers and police officers — stormed the Abuja residence of the supreme court justice over an allegation that illegal activities were going on there.

The search warrant was granted to one Lawrence Ajodo — identified as a chief superintendent of police who had claimed to be attached to the AGF’s office — but is now said to be an impostor.

Documents had revealed that the warrant presented by security operatives to search Odili’s residence bore a wrong address.

Then, the police, on Thursday, paraded 14 persons from different professional backgrounds such as journalism, banking, law enforcement and law in connection with the invasion.

Frank Mba, force public relations officer, said the suspects include a fake chief superintendent of police (CSP), a journalist, and an Islamic scholar.

He said 10 other suspects, including two military personnel, are currently at large.

Two of the suspects had also alleged that one of those involved in the raid claimed to work as a consultant for the office of the attorney-general of the federation.

However, the police said their investigations revealed that “there is no involvement at all” of the officials of the office of the AGF in the raid.

Ojodu and the other suspects, the police said, “are loose cannons” who forged “different documents” and carried out their “crimes under false representations.”

Reacting in a statement signed by Umar Gwandu, a spokesperson in the office of the AGF, Malami said Mr Ajodu’s case is that “of a drowning man scavenging for a dying partner.”

The attention of the Office of the Honourable Attorney General of the Federation and Minister of Justice has been drawn to a confession of a suspect during interrogation in the investigation of the recent invasion of the residencecof the highly respected Justice of the Supreme Court; Justice Mary Peter Odili.

This is a case of a drowning man scavenging for a dying partner. We are happy to note that investigation has commenced to unravel the circumstances and personalities behind the invasion and sponsored campaign of calumny against the Honourable Attorney General of the Federation and Minister of Justice.

It is our desire and we hope that the investigation would also disclose those after the Honourable Attorney General of the Federation and Minister of Justice, those dragging his personality, his name and his exalted office in the dirty politics of disrepute. This is an orchestrated attempt to stir unnecessary controversies and Public apprehension.

We asked the suspect to present documents of engagements where he worked as a consultant to the Attorney General of the Federation and Minister of Justice, whether in past or now.

We boldly and unequivocally challenge the fake consultant/police officer to come out with answers or responses to these questions to the general public.

The Honourable Attorney General of the Federation and Minister of Justice superintends over and respects the rule of law who will not do anything to undermine the sanctity of his office and that that entire judiciary and Justice sector.