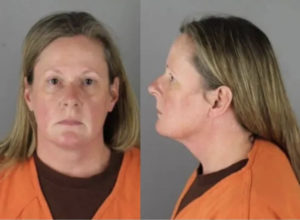 Wright, a 20-year-old Black man, died of a gunshot wound to the chest in April 2021, according to the Hennepin County Medical Examiner’s Office, which classified the manner of death as a homicide.

He was shot and killed during a traffic stop just before 2 p.m. on Sunday in Brooklyn Center, after officer Potter said she mistook her taser for a gun and fired at him.

He was shot and killed during a traffic stop in Brooklyn Center, after officer Potter said she mistook her taser for a gun and fired at him. He died about 10 miles from where George Floyd, another black man was killed by a Minneapolis police officer last year.

Body camera video showed Potter yelled, “Taser!” but fired her service weapon, killing the 20-year-old Wright as he tried to get back into his car.

According to a police report filed at the time, Potter said thought she’d grabbed her Taser instead of a gun.

Potter, 48, had been with Brooklyn Center Police for 26 years before she submitted her resignation following the shooting. Potter’s trial is scheduled to start November 30.

The amended Complaint further details how no reasonable officer could confuse their sidearm for a TASER. Kimberly Potter’s killing of Daunte Wright was not a mere accident. We and Daunte’s family all commend Attorney General Ellison and his team for working to obtain the strongest and most just conviction possible.