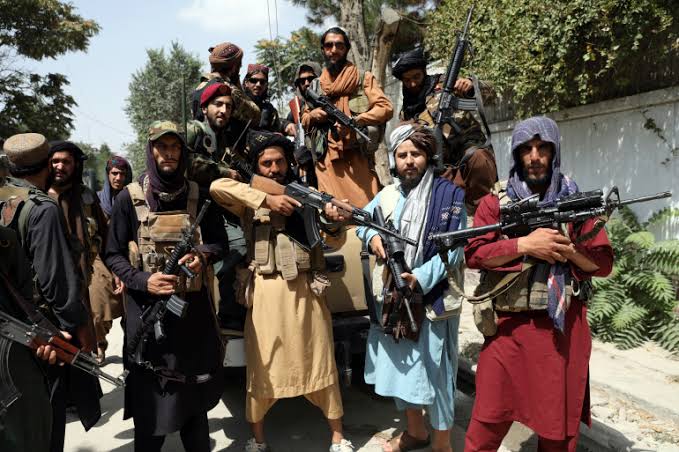 Afghanistan is a country in South Central Asia that has been caught in war and fighting for decades.

Involved in this war over the years is the terror group, Taliban fighters that have been fighting power in the country.

The extreme Islamic group once ruled Afghanistan from 1996 to 2001 but were repelled by the United States.

When in control, the terror group permitted strict punishments like public executions, amputations for theft and more.

Men were made to grow beards and women had to wear burkas – one-piece veil that covers the face and body.

However, the group was expelled in the wake of 11 September 2001 World Trade Center attacks in New York that killed over 3,000 people, triggering major U.S. initiatives to combat terrorism and defined the presidency of George W. Bush.

Two of the planes were flown into the twin towers of the World Trade Center in New York City, a third plane hit the Pentagon just outside Washington, D.C., and the fourth plane crashed in a field in Shanksville, Pennsylvania.

Taliban were accused of providing a sanctuary for the suspects of the US attack – Osama Bin Laden and al Qaeda movement.

Reacting, US militarily removed the group from power and tried to help a democratic administration build a steady nation.

However, they regrouped in the country’s hinterlands, launching attacks against international forces in Afghanistan.

In 2020, US & the Taliban signed a peace deal with US agreeing to withdraw its troops & leave power to a new government.

But, the terror group continued to kill Afghan security forces and civilians even until early 2021.

Despite concerns about the country’s vulnerability without international support, Joe Biden administration announced its exit.

August 31 has been set as the final exit date for all American forces – few days before 20th anniversary of World Trade Center attacks.

As US troop gradually exited, the Taliban over the past months began taking control of territories around the country.

Then on Sunday, Taliban fighters entered Afghanistan’s capital, Kabul to negotiate a ‘peaceful surrender’ of the city.

Taliban fighters also freed inmates from Pul-e-Charkhi prison in the capital – the largest prison in the country – and other correctional facilities.

Then, they seized the presidential palace with President Ashraf Ghani and other officials fleeing the country.

The invasion of Taliban fighters sparked chaos as many Afghans and others struggled to flee the country.

Thousands of people are now displaced, living in parks and open spaces in Kabul and other parts of Afghanistan.

Several countries across the globe are evacuating their nationals and civilians desperately attempting to flee.

At least five people have died as they struggled to board evacuation flights at Kabul airport and escape the Taliban.

Footages show countless people jumping abroad US evacuation plane on the runway, while some fall to their death.

Also, footages show traffic gridlock as some try to leave the country by road, causing congestion for those traveling on foot.

Activists around the world are now calling for help for stranded people, especially women and children.

There are already reports that Taliban fighters are seizing girls as young as 12 to be their ‘sex slaves’ in some cities.

Many people have taken to social media, especially Twitter to call on countries to grant asylum to those in need.

Also, politicians and campaigners have been settling up charities to support refugees. You can also make a difference by raising awareness and donating to reliable organizations.