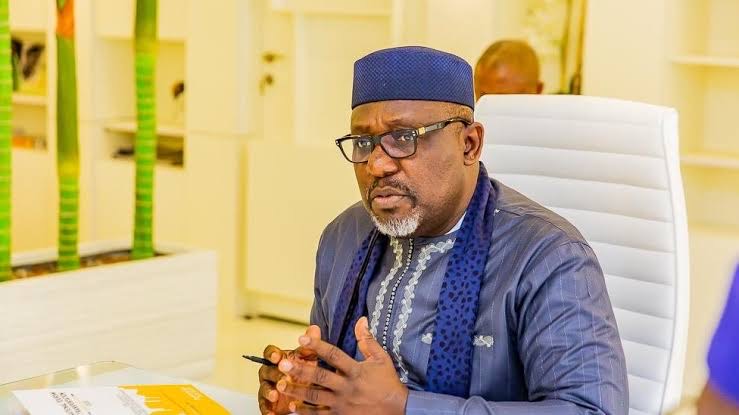 All Progressives Congress has disowned a letter dated July 12, suspending the former governor of Imo State, Rochas Okorocha, as internal crisis continues to rock the party in the South-East state.

APC said on Tuesday that the suspension letter signed by Mai Mala Buni and John Akpanudoedehe, National Chairman and Secretary of APC caretaker committee, was fake.

The suspension letter addressed to Okorocha had read;

This is to communicate to you, the National Working Committee (NWC) of the All Progressives Congress (APC) Party ratification of your suspension by the Imo State Chapter of our great party for anti-party activities.

The suspension follows after the recommendation by the Imo State Disciplinary Committee set up to investigate allegations of gross anti-party activities against you which is in line with Article 21 (B) I-VI of our party’s constitution.

The letter had stated that Okorocha was suspended for “flagrant public abuse on the person and office of the President, Republic of Nigeria (An APC-led government).”

However, according to Akpanudoedehe, the letter did not come from the ruling party.

It has come to the attention of the National Secretariat of the All Progressives Congress (APC) that a fake letter of a purported suspension of Senator Rochas Okorocha from the party is circulating in the public space.

Fifth columnists and forgers have obviously taken advantage of the unfortunate and recent leaks of our official correspondences with the Independent National Electoral Commission (INEC) to copy and paste forged signatures of the CECPC Chairman and Secretary on equally fake letters.

The APC does not currently have a “National Working Committee” as stated in the fake letter, but a Caretaker/Extraordinary Convention Planning Committee (CECPC) which has been saddled with the mandate to reposition, unite and strengthen our great party.

He added that the letter “is a figment of the imagination of fifth columnists”, and urged members to ignore it.