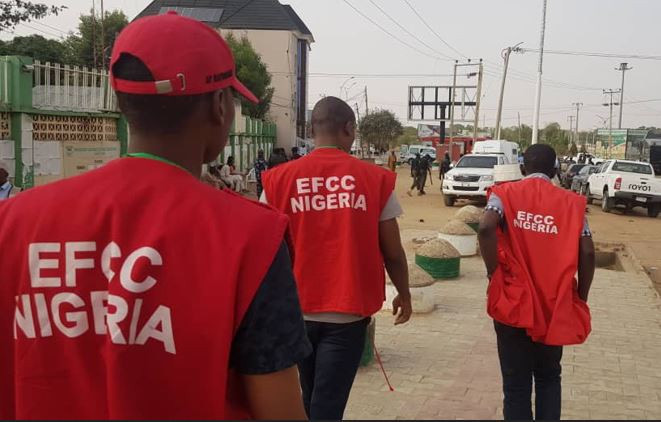 Operatives of Economic and Financial Crimes Commission have arrested 30 suspects during a raid on Parktonian Hotel in the Lekki area of Lagos State.

The operatives were alleged to have gained entry into the occupants’ rooms by seizing the master cards from the management of the hotel at gunpoint.

It was gathered that some of the occupants were naked under the duvet when the operatives gained entry into the rooms.

One of the victims, while lamenting the invasion, told the Peoples Gazette;

I was naked, and I had to beg them (for me) to put something on. I am actually hypertensive, but I put myself together because I am not a criminal in any way.

Another eyewitness said to the publication;

They broke into the hotel and threatened to shoot the receptionists and management workers if they didn’t immediately release the master access card to them. So, the hotel workers had to comply immediately.

According to the newspaper, it was learnt that no fewer than 13 guests were whisked away by the EFCC operatives during the raid.

Meanwhile, Wilson Uwujaren, the spokesperson for EFCC, later confirmed the raid in a statement.

He said the operatives acted on verified intelligence targeted at suspects at Parktonian Hotel, adding that 30 suspects were arrested during the raid.

Operatives of the Economic and Financial Crimes Commission, acting on verified intelligence, carried out a sting operation targeted at cybercrime suspects at Parktonian Hotel in the Lekki area of Lagos State in the early hours of Tuesday.

During the exercise, 30 suspects were arrested. Of this number, 24 have been established to be involved in internet-related fraud. The operation was executed without incident as the facility had been under surveillance for weeks during which the commission was able to isolate the rooms where the suspects were lodged.

Access to the rooms was seamless as the commission has standard procedure for accessing such facilities without application of force or discomfort to guests. No guest of the hotel was molested.

But the commission observes a disturbing trend in which cybercrime suspects now employ kept ladies who feign nakedness as a decoy to distract operatives of the commission to enable them to destroy incriminating evidence before arrest.