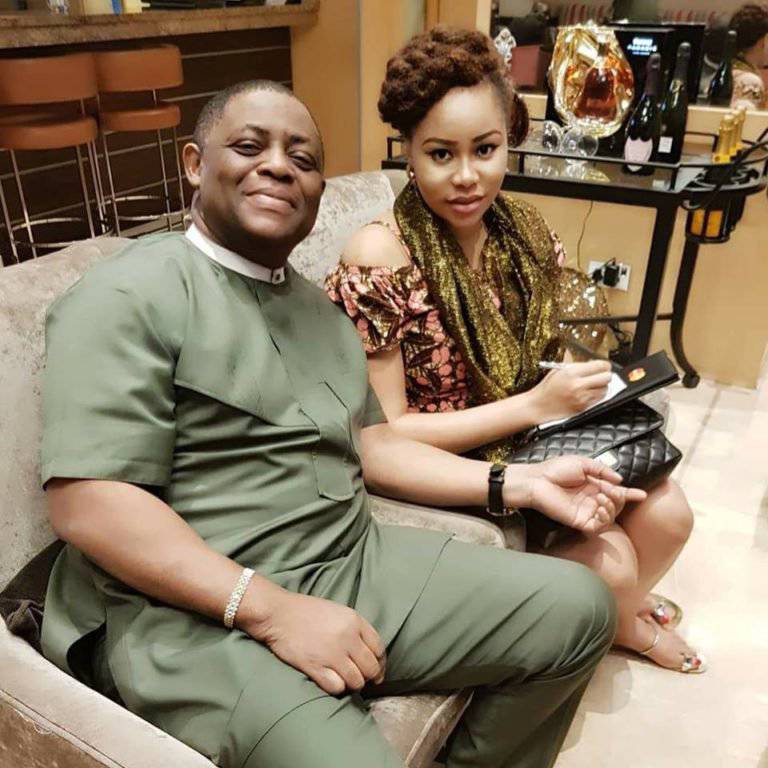 Former Aviation Minister, Femi Fani-Kayode (FFK) has denied physically assaulting his estranged wife, Precious Chikwendu at any point in their relationship, saying her allegations are baseless and vile.

Precious, in an affidavit, that she deposed in support of an initial motion filed pursuant to Article 69 of Children’s Rights Act of 2003, accused the former minister of beating her on several occasions, even when she was pregnant with his children.

The former beauty queen also accused FFK of drugging her with the help of a DPO at Asokoro police station in Abuja and with all the allegations, asked Abuja High Court to grant her custody of her four children.

In reaction to the claims, Fani-Kayode in a statement by his media consultant, Hon. Oladimeji Olaiya described Precious’s claims in the affidavit was filed in court as lies and falsehood.

The statement was titled, ‘Press statement on the vile and baseless allegations of Precious Chikwendu against Chief Femi Fani-Kayode’.

Olaiya, in the statement released Saturday, March 6, hinted that they will provide “evidence” to the court as to why the children should not be in Precious’s custody.

He also denied the accusation that Precious was stripped and drugged. Olaiya accused Precious of trying to kill FFK and her children while they were living together.

The statement of claim and affidavit that was filed in court by one Precious Chikwendu against Chief Femi Fani-Kayode is filled with lies and falsehood. Not one thing that she has alleged there is true. She is a pathological liar and a slanderer and we intend to prove this in court.

We also believe that she is unfit to be a mother and that she has shown nothing but cruelty to her children whom she has never taken care of or shown the love and affection of a mother. We believe that the children’s lives would be in danger if they are with her and we shall prove this in court.

For the avoidance of doubt at no time did Chief Fani-Kayode expose his children to danger and he has always provided them with the best of care including 12 nannies and nurses who did all the work even when their mother was in the house and whom she herself employed.

Chikwendu’s only pastime was to post pictures and words on Instagram and sleep with men outside. She also tried to seduce a number of Chief Fani-Kayode’s friends when he was in detention and extort money from them.

Neither is it true that she was ever beaten by Chief Fani-Kayode or anyone else in his staff and security team, either when she was pregnant or not pregnant and it is not true that she was subjected to any form of physical or mental abuse from them.

As a matter of fact, she was the abuser and not Chief Fani-Kayode or any of his security team or staff. On one occasion, she cut two people with a knife and almost bit off the finger of a third when she was trying to attack and kill her own children and husband with two knives. Thirty people witnessed this and we have it on video.

On another occasion when she was caught in bed with a married naval officer in a hotel she cut her own foot with a broken bottle and said she would tell the world that her husband did it. At least three people witnessed this. She and her lover begged not to be prosecuted for adultery even after there was evidence to show that they were planning to have Fani-Kayode murdered.

At a later date, she was committed to a mental health facility for one month. We urge members of the public to wait until the truth is revealed about Chikwendu, her mental and physical abuse of her own children, her mental illness, her numerous attempts to murder Chief Fani-Kayode and his four children, her adulterous ways, her unfathomable cruelty, her gold-digging ways, her violence and so much more before they make up their minds.

All this, with the necessary evidence, will be produced in court. Sadly due to the fact that the matter of the court’s jurisdiction is still in question, we cannot say anything until that matter is settled.

Once it is and we file our responses and statement of defense and affidavits Chikwendu’s attempt to rubbish a man that has been her entire family’s sole benefactor for seven years and one that has shown her nothing but kindness and love shall be exposed.

And so shall her inexplicable ingratitude and greed. By that time her little pity party and false and misguided attempt at playing the victim, which she uses to sustain her wayward and disgraceful lifestyle, will come to an end and people will know her for the cheap harlot and desperate crook that she really is.

Even though Chikwendu’s plan was to ambush Chief Femi Fani-Kayode into surrendering custody of the children to her, an act that will be grossly inimical to the proper development and well being of the children, we will not respond to her other than to say that our client, Chief Femi Fani-Kayode has expressed gladness that Chikwendu has purportedly approached a court.

Read Also: ‘I Never Abused Her, I Caught Her In Bed With Married Man’ – FFK Reacts To Viral Video Of Him Allegedly Abusing Estranged Wife, Precious (Watch)

This is an action that will leave our client with no other option but to expose Chikwendu’s lies, wicked and evil plots, and life-threatening actions against him over the years: issues he had hitherto kept to himself in order to save her from the horrifying indignity and whatever shame is left of her following such revelations.

These would surely be adequately supported with the necessary documents and videos. The world is about to be shocked with the truth about her inhumane actions and other deficiencies which our client has over the years endured from her and covered in order not to expose her to any indignity.

The only reason Chikwendu has not seen her children for close to seven months is that she has refused to come to the house to do so. She was given access to the children 7 months ago and visitation rights but she refused to exercise them.

She also speaks to the children regularly on the phone but is always threatening the lives of their staff and even screaming at the children themselves in an uncontrollable rage on many occasions. It is pertinent to note that she was never asked to leave the house or thrown out. She walked out on her own saying she was hearing voices even when the entire household was begging her to stay and she abandoned her husband and four young children to meet other men outside.

After she finished having her fun Chief Fani-Kayode refused to let her back into his and resolved to keep her out of his life. This is the best decision he has made in the last 7 years. Chikwendu claims that she was stripped and drugged. This is not true. Rather she was held down by a contingent of 4 policemen and policewomen in the presence and under the orders of the DPO of Asokoro Police Station and in the presence of her Aunty Joy and at least 30 frightened and agitated police officers, workers, and members of the household and family after which she was sedated with injection by a Dr. from the psychiatric hospital.

This was after she attacked her husband and children with two very large knives and attempted to kill them and after she held them, hostage, upstairs in their rooms for three hours whilst in a drunken craze and threatening to kill everyone including the police who had been called to rescue their lives.

It is important to note that Chief Fani-Kayode and the children were not even present when she was rushed, apprehended, and sedated by a combined force of male and female police officers because they had locked themselves upstairs hiding in their rooms in order to save their lives. This whole episode traumatized the children so badly that they needed professional care and till today they shudder when they see their mother.

This is made all the worse that on one occasion she beat her first son so badly that his face swelled up like a football and he had to be rushed to the hospital where she admitted her offense to the doctor. We have pictures of his damaged and badly swollen face.

His crime was that he had called one of his 3 nannies “mummy” and this angered Chikwendu who then flew into an uncontrollable rage and punched him in the face in front of 7 nannies. On a separate occasion in front of three Pastors, she also beat one of the triplets mercilessly simply because he had dared to cry during prayers. Again we have evidence of this and the Pastors and nannies will testify.

It was after the frightful event of her holding the entire household hostage with the two knives and threatening to kill everybody that, whilst sedated, she was taken to and admitted to a private mental institution where she was diagnosed as having severe bipolar disorder, depression, and schizophrenia.

The doctors advised that she be kept there for at least three months for her own sake and for the sake of her family and those living with her in order to ensure that she did not kill herself or kill anyone else and that she gets the care and medical attention she so badly needed.

The entire event was filmed and on video. If she had not been sedated and rushed to the hospital she would have killed her husband, children, Aunty, and others in the house that day including the DPO and her policemen as it was obvious that she had lost her mind.

There is no doubt that she is a depraved and dangerous woman and her medical file will be produced by the hospital at the appropriate time. So will her file which documents all her adulterous atrocities at Asokoro Police Station. In the space of 4 years, Chikwendu had to undergo 5 different surgical operations, all of which Chief Fani-Kayode paid for, and in 7 years she had numerous extra-marital affairs. This was a lifestyle that was unacceptable to Chief Fani-Kayode and one which he found utterly repulsive and repugnant.