#OccupyLekkiTollGate: Nigerians Plan Another Protest Against Reopening Of Tollgate 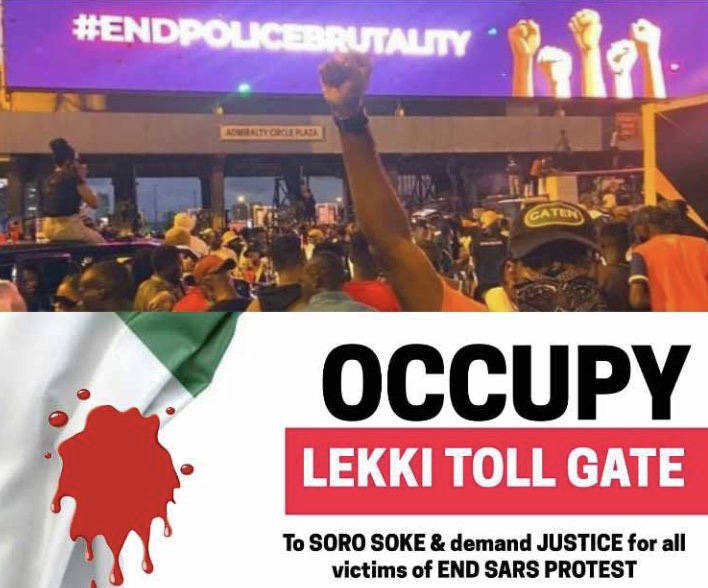 Nigerians have resolved to protest against the ruling of Lagos State Judicial Panel which permitted Lekki Concession Company to regain possession and reopen the tollgate.

It would be recalled that toll plaza was shut down after several persons were gunned down on October 20, 2020 by some persons believed to be soldiers and policemen during #EndSARS protest in Lagos state.

Permission to repossess the tollgate has now been given following months of sessions by Lagos judicial panel, a committee established to investigate cases of police brutality and human rights violations committed by operatives of the dissolved Special Anti-Robbery Squad (SARS) in the State.

However, Lagos panel was divided over the decision as five of nine members of the panel led by Justice Doris Okuwobi (rtd), voted in support of the reopening of the tollgate at the last sitting on Saturday, while four others, including two youth representatives opposed to reopening.

Irked by the decision of the panel, a protest has now been scheduled to hold by 7:00am on February 13 at Lekki tollgate.

Many Nigerians on social media, supporting the planned protest, stated that the tollgate remains shut until justice is served to the victims of Lekki shooting.

Tweeting in support of the protest, Omoyele Sowore, said the tollgate must remain shut until the perpetrators of the killings are brought to justice.

No to the reopening #Lekkitollgate, the perpetrators of #LekkiMassacre must be brought to book. @jidesanwoolu #Buratai must be brought before @IntlCrimCourt #RevolutionNow #Buharimustgo pic.twitter.com/MBNnFAzOPi

#RevolutionNow No to #Lekkitollgate if @jidesanwoolu @followlasg are desperate for toll revenue, let them toll @AsiwajuTinubu’s Bourdilon home in Ikoyi, there is plenty of traffic there , they can make a lot of revs from political jobbers trooping in & out #EndSARS #BuhariMustGo pic.twitter.com/Um8AeSfZBU

Social media influencer, Ayemojubar, who also tweeted in support of the protest, referenced a quote by Emiliano Zapata, main leader of the peasant revolution in Mexican state of Morelos between 1910 and 1920.

“If there is no justice for the people, let there be no peace for the government” – Emiliano Zapata.#RevolutionNow #EndSARS #OccupyLekkiTollGate

Other Nigerians have also taken to social media to express their backing for the protest.

What we have learned from the Judicial panels , #EndSARS , and #LekkiMassacre ;
1. Never negotiate with this govt.
2. When you go out on the streets, stay on the streets until your demands are met.
3. Prepare for violence, they always bring it.

Re-opening of Lekki Toll Gate is the govt saying "forget it, that one has passed". But what they don't know is that youths are determined to get justice.

Lekki Toll Gate must remain closed until investigations are concluded and justice is served. #OccupyLekkiTollGate pic.twitter.com/id2Zo0OgRJ

What your occupation? My occupation is to #OccupyLekkiTollGate on Saturday February 13th.

To fight for justice. pic.twitter.com/qnEQcf56w6

We will not allow these government to brainwash us ,we need justice for those heroes that sacrificed there lives at the lekki massacre. Enough of these oppression and tyranny.#OccupyLekkiTollGate pic.twitter.com/Obv0DWDlPm

The panel was a faux from the onset!

Wake so happy to see this treading on Twitter, Nigeria Youth you are loved 🥰 #OccupyLekkiTollGate pic.twitter.com/MIeylLzw9G

That valentine package wey u d plan for bae, carry am come #OccupyLekkiTollGate

Yes , I'm talking to you 🙄 pic.twitter.com/7eYYOO4tzF

Nigeria youths are not foolish,
we learn very fast,
There will be drones cameras everywhere in the sky.
Everybody on ground will go live on their social media accounts.
So Fashola Hommes will not comma discover another camera weeks later
#OccupyLekkiTollGate pic.twitter.com/MiPjYV7SRM

After killing our brothers and sisters at Lekki toll gate, they want to give the former Chief of Army of staff Buratai immunity by appointing him Ambassador.

They want to cover up the blood of our comrades with lies.
Don’t let them! #OccupyLekkiTollGate pic.twitter.com/vKFXNN17Sn

You can’t open a toll gate where victims of state sanctioned murder are yet to get justice.

No Justice, No Re-Opening. pic.twitter.com/P7z5Cr3HCN

Do not let any Mugu or government advocate tell you to calm down! #OccupyLekkiTollGate the army must face justice! Sanwo Olu must face justice! LCC is not bigger than the lives of the lost, they must submit their videos. We saw the killings live on camera! #RevolutionNow pic.twitter.com/TjYHT324SR

The Memories of the Deceased cannot be in Vain.

We say NO TO RE OPENING OF LEKKI TOLL GATE.#EndSARS #OccupyLekkiTollGate pic.twitter.com/5nQtmPSfEr

How are we so quick to re-open the #Lekkitollgate when justice have not been served to victims and relatives who lost family members during the #lekkimassaccre?

As long as there is no justice for the citizens, the government shall not know peace.#OccupyLekkiTollGate #Justice

#EndSARS Protester Who Gave Birth In Prison Still In Custody…

#EndSARS: ‘If Youths Want Jobs, They Should Behave…