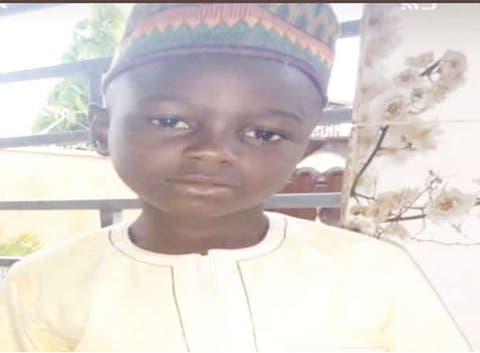 A seven-year-old boy, Adamu Haruna has been declared missing in the Kagini area of Abuja, it emerged on Tuesday.

According to family sources, Haruna who lives with his uncle, Aliyu Usman, was playing in their compound before he went missing on Friday, June 19.

Efforts by the family to find him, including visits to the neighbouring communities, have proved abortive.

His uncle, Aliyu Usman, said the family also printed fliers with his picture on them but no one was yet to contact them.

Adamu’s father died last December and I went to the village in January to bring Adamu to Abuja so that I can take care of him and he can continue his studies here in Abuja, but because of the lockdown, he hasn’t started schooling.

I was at work last week Friday when my wife called that she could not find Adamu and that she had looked for him in the area. She said Adamu was playing inside the compound and she later discovered that he was no longer there; so, I told her to check the Islamic school he attends but he was not there.

Speaking on efforts made to find him, he stated that;

On Saturday morning, we mobilised people alongside the vigilante group to search for him, but all to no avail and on Sunday, we went round again up to the Kubwa area, showing people his picture, but nobody admitted seeing him.

He has never gone out like this before, but of late, I noticed that he liked to be on his own and that he was always withdrawn; and whenever I asked him what was wrong, he would say nothing. If Adamu decides to keep mute, he would not say anything no matter how much you pester him.

I have called my father to help inform Adamu’s mother that we cannot find him, but he said we should resort to prayer so that God will bring him out from wherever he may be.

The incident has been reported at the Gwagwa Police Station.

Confirming the incident, the spokesperson of the FCT police command, Anjuguri Manzah, said efforts were being made to find the boy and reunite him with his family.