Aminu Saleh, the Kwara State Commissioner of Police on Tuesday said the police had arrested the Vice President of the Federal Polytechnic Offa Students’ Union Government. 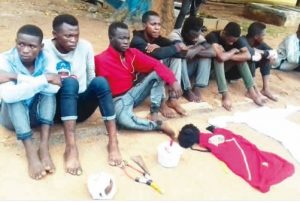 The police commissioner said the VP, Tajudeen Selim, was arrested for alleged involvement in cultism in Offa Poly, in the Offa Local Government Area of Kwara State. He added that other Offa poly students; Temitope  Omotosho, Adewusi Vincent  an ex-student of Kwara State Polytechnic, Ilorin, Olanipekun Abimbola, and another suspect, Ayomide Ololade, were arrested for alleged involvement in cultism.

Saleh spoke through the command’s Police Public Relations Officer, Ajayi Okasanmi, while parading the suspect in Ilorin, the Kwara State capital. He lamented that despite the alarm the police raised on the plans by cults to mark the cultism day on Saturday, the suspects ignored the warning and were initiating new members of the Aiye Confraternity when the police apprehended them.

He said, “these cultists from the Federal Polytechnic Offa blatantly refused to heed our warning and were rounded up by the Anti-Cultism Unit of the State Criminal Intelligence and Investigation Department, during the process of initiating new members in preparation for an attack.”

The CP identified the new initiates as Akinsebikan George and Gbolahan Ogunleye, adding that the red and white regalia of Aiye Confraternity, razor blade, calabash and one live cartridge were recovered from the suspects.

Howevef Selim, who is a HND year-two student in the Department of Quantity  Surveying, said he was not a cultist, claiming that he had gone to settle some problems among the arrested suspects when the police nabbed him too.

He said, “Someone came here to accuse us that we are cultists. Since I became the Vice President of the Offa Polytechnic Students’ Union Government, I have not recorded any cult clash. I have always been there to settle any problem that could  arise. If there is any fracas in the school, the Students’ Union Government would direct me to intervene. That is the reason why I was there”.

‘Hardship Made Me Try To Sell My Baby For…