– Game of Thrones star Jason Momoa, 38, has married his girlfriend of 12 years Lisa Bonet, 49
– The couple whom many assumed married in 2007 have two kids aged 10, and 8 together
– Fans assumed they were married after he referred to her as ‘his wife’ in an interview
– The secret wedding was attended by Lisa’s daughter with Lenny Kravitz Zoe, and Jason’s co stars
– The couple met through mutual friends in 2005

For many years fans of Game Of Thrones star Jason Mamoa assumed he got married 10 years ago.
In fact, the hunky actor, 38 only just married his girlfriend and mother of  his two kids sometime in October.
The couple reportedly applied for their marriage license 2nd October and got married a week after. The ceremony was said to be very intimate with just close family and friends, according to People.

Momoa and Bonet have two children, Lola, 10, and Nakoa-Wolf, 9, having met in 2005.
The GOT alum is also stepdad to Zoe Kravitz from Lisa’s marriage to Lenny Kravitz.

The rumours the pair had already wed surfaced years ago when he began openly referring to his other half as his wife. 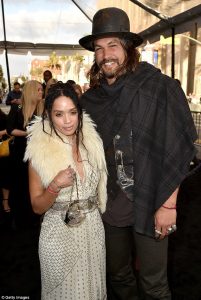 ‘My wife being a very pretty woman. She’s beautiful and I love her. … My wife’s Lisa Bonet. I’m a very lucky man.’

Rock climber Chris Sharma and several of Momoa’s former costars also made the event.
For the wedding, a close friend said the actor looked handsome in an ‘unbuttoned white shirt and a lei. He styled his long locks into a man bun.’ Lisa, 49, ‘looked beautiful,’ the source added.

Jason Momoa Reportedly Moves Back In With Lisa Bonet 1 Month…