Aeroknite: From Fire- Fighting To Advertising, The Sky’s Limit For Manchester Drone Start-Up 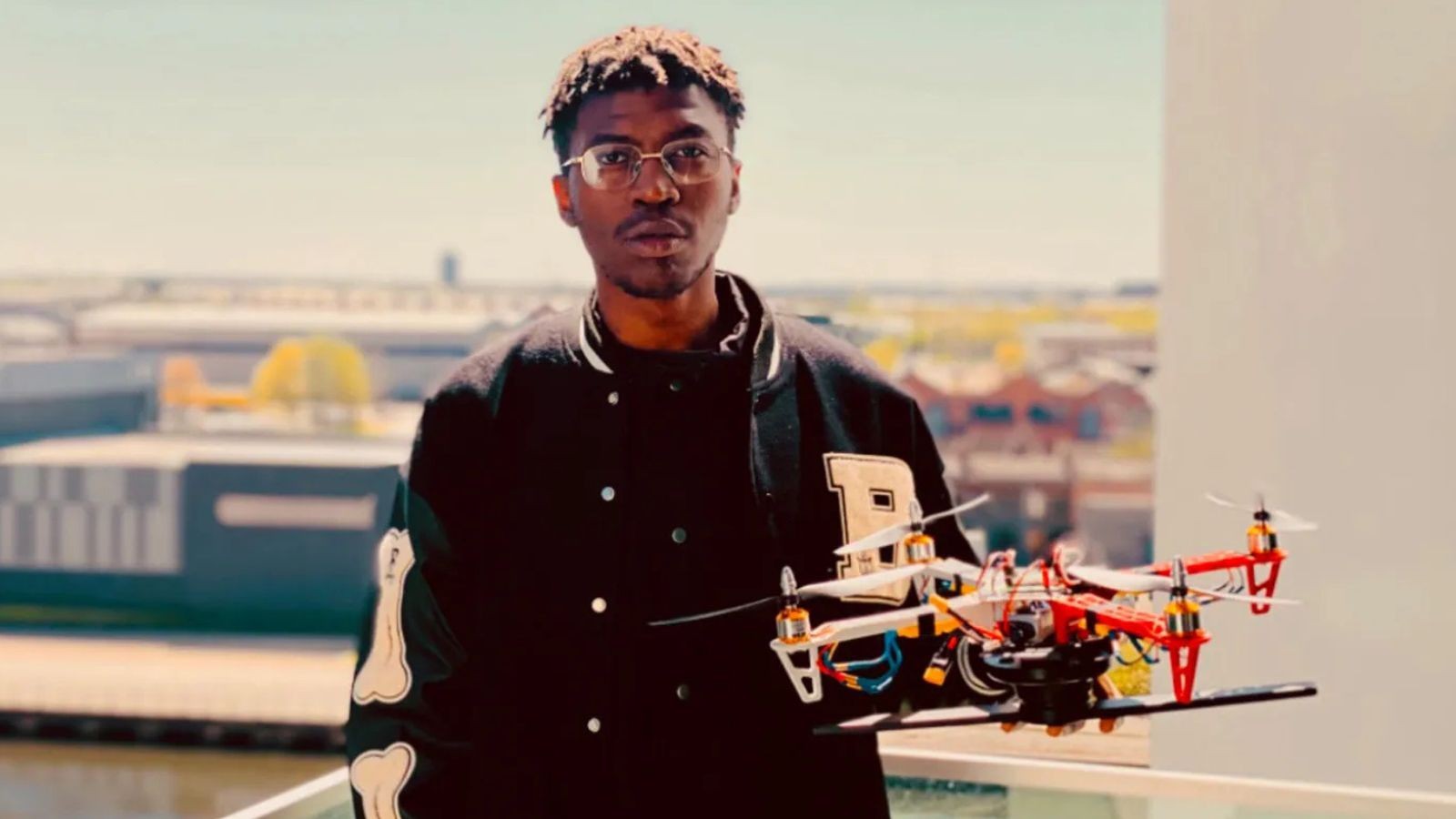 Drones have attracted their fair share of negative coverage in recent months, from surveillance fears to Russian drone attacks on Ukraine. But in Manchester, a tech founder is developing drone technology that could become a marketing tool, and potentially save lives too.

This year in the UK, we had record summer high temperatures and we’re starting to see more wildfires,

The fire extinguishing drone, if I’m being honest, that’s one of the key missions of the company.

Having experienced the speed with which a fire could spread as a youngster in Nigeria – as well as seeing the devastating impact of wildfires in Australia on the news in more recent years – he knew he had to do something.

Jokingly remarking that he didn’t want to sound like a “doomsday prepper”, he believes there is an urgency to find solutions to pressing issues like this now as temperatures continue to soar globally – and drones could be the key.

We have the technology to mitigate this now. All the current methods they’re using with planes, first off, you’re risking the lives of the pilots and it’s inefficient. There’s a huge problem with nighttime firefighting in mitigation.

Why don’t we use drones for these types of issues? As opposed to liquid fire extinguishing agents, we use foam so we’re able to pack more onto a drone. When it’s in contact with fire it just expands. We have the tech to stop this now.

Although he is fuelled by his desire to use drones as a force for good, what inspired him and where did the idea for hologram drones come into play? 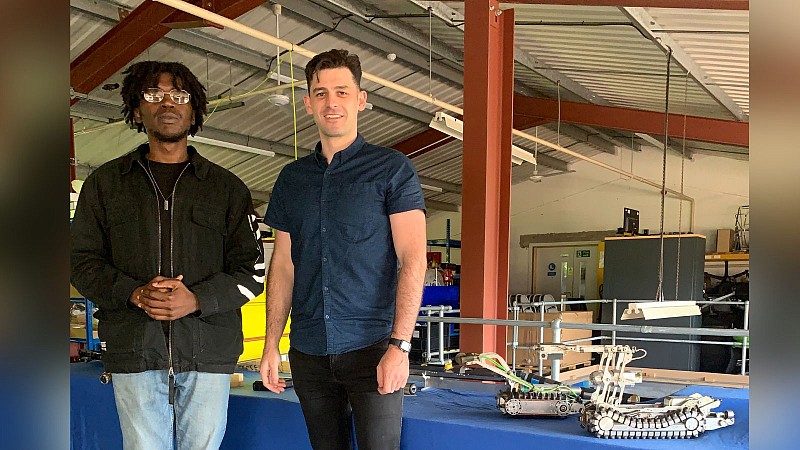 How the Concord taking flight inspired Aeroknite and hologram drones

As a young boy, his parents took him to see a Concorde flight taking off from Bradford, igniting his ambition for all things related to aviation.

I remember just thinking: ‘This is one of the most amazing things I’ve ever seen!’ I’ve always wanted to do something in the aviation space.

After heading back to Nigeria to study aerospace engineering, he had to complete a mandatory year of service where all graduates are required to work in a specific industry.

It opened up an opportunity for him to take his first steps towards his ambition and began working as a flight engineer at an airport there.
Mingling with people at the airport, conversations set the wheels in motion for his two drone technology ideas. But he was faced with a pressing dilemma: return back to Manchester and his studies to do a master’s degree in aerospace engineering or continue with flight school to become a commercial pilot? 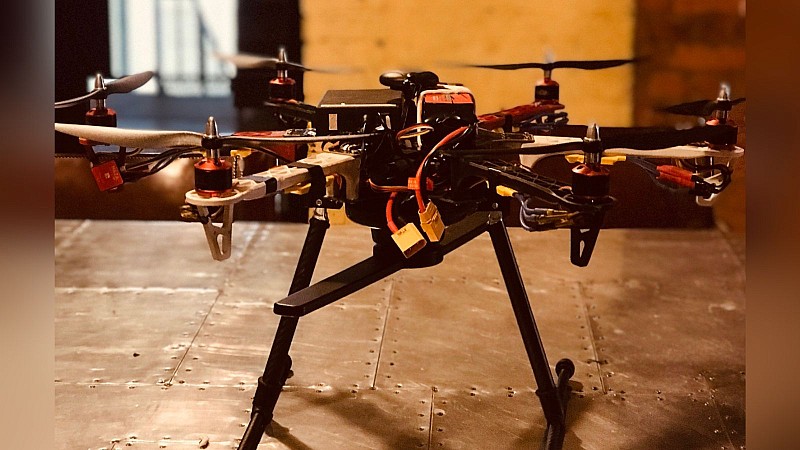 He settled on Manchester and looking back, it was definitely an opportune decision.

I’m glad I didn’t continue with flight school because just after that, Covid hit. Pilots were not in a good position at that point! I came back to Manchester, did my master’s degree and that was where I started developing our projects.

At university, although he was deep into working on his idea for the fire extinguishing drone, his love of music sparked the idea behind the hologram drone.

I used to make music at university,

Working on my album I thought: ‘How can I immerse the audience into the project?’ That was the initial idea behind the hologram drone.

He was excited by the idea that hologram drones could become an innovative tool for advertising in the skies. Whether it be for brand messages, artistic exhibitions or even promotional tools for musicians with album art or lyrics, what better way to capture a mass audience than where they can’t avert their eyes?

Before diving headfirst and launching both his drone technology ideas together, as a first-time founder he knew he had to start somewhere to “achieve the bigger picture”. The hologram drone had a greater business-to-business potential and less research time.

It made sense to do the hologram drone first, put it out to the market and use that to fund the development of the fire extinguishing drones. That was my mentality towards it.

When advertising in the skies with planes, it typically involves a momentous operation from the set-up time at an airport to the cost of fuel. With the use of his hologram drones instead, he thinks this will be a much quicker, and more sustainable, alternative to impressive aerial displays in future.

Using the latest advancements in aerial technology, a localised hologram is projected onto a specific drone to give an impression of an image in the sky. 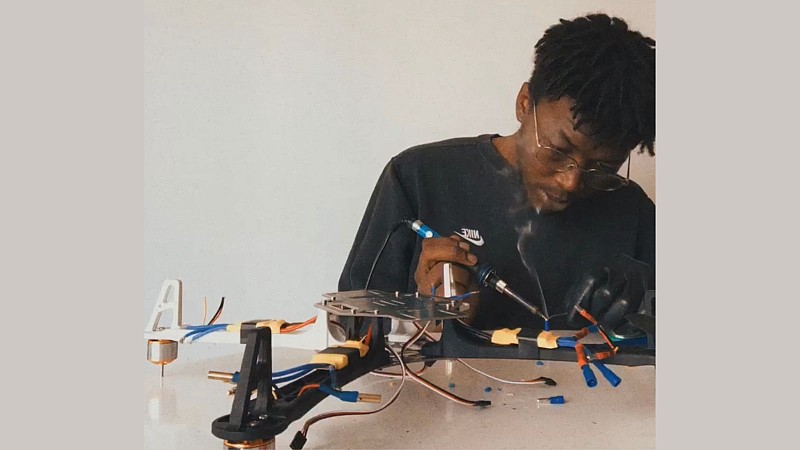 A specific drone will have media projected onto it, as opposed to light.

But with a swarm of display drones, it could be far more immersive for an audience.
Aeroknite has already started working with 10 artists and businesses in Manchester to propel this forward.

If we’re to swarm with more than one drone, we are able to boost the level of displays because instead of using lights, we’re using holograms so it’s like a flying screen!

On Bonfire Night or New Year’s Eve, drones might soon be lighting up the skies instead of fireworks too.

We take the safety of our systems very seriously

Although he’s very aware of the concerns some may have about the rising use of drones in the skies, whether it be light, noise pollution or the reliability of them, it’s exactly why Aeroknite has spent a long time crafting the ideas before launching them officially.

We take the safety of our systems very seriously. That’s why we’ve deleted a lot of things with the hologram drone. Once it’s out in public, it needs to be done right because we never want to hear about a scenario like a crash.

On the hologram drone, the team has inbuilt a system to ensure if several motors happen to go off on the drones they can still land safely. It’s not just about safety though. Sustainability and how long drones can be in the skies, especially for the firefighting drones, is crucial. 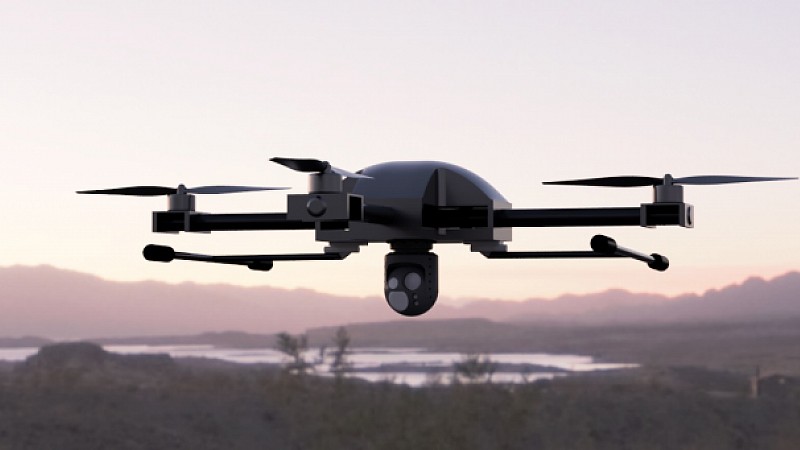 Drones are really sustainable, they’re battery powered and electric. What’s really interesting is with new advancements in battery technology, over the past three months, we have seen improvements in how long drones can operate in the sky.

With the development of wireless charging and his plans to continue evolving the prototypes, the uses for drones might be endless in future.

Now, we’re seeing a lot of advancements in drone tech and battery tech. Over the next year, I feel like drones will become more present.

With a team of seven based at No.1 Hardman Boulevard in Manchester, he’s currently seeking investment to boost the company’s ambitions with both drone technologies. Although the drones are built in MediaCity, Aeroknite recently partnered with a manufacturer in Leeds.

As the Civil Aviation Authority (CAA) eases its regulations for certain uses beyond line of sight, where users must ensure drones are in their line of sight at all times to avoid collisions, it is a significant step in the right direction.

Being able to fly the drone beyond line of sight was one of the key things that was needed,It will take everything up a level.

For now, his eyes are firmly on the sky as he continues building Aeroknite.