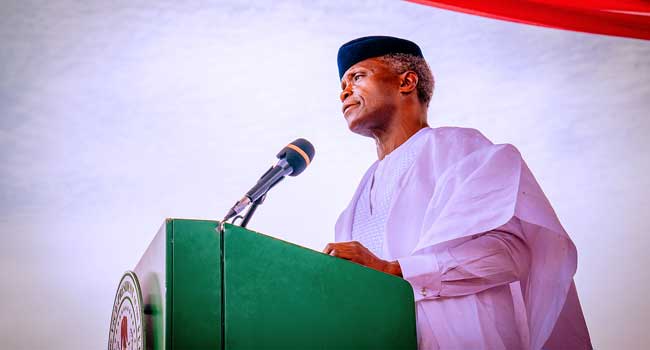 Vice President Yemi Osinbajo, on Tuesday has stated that there is no gain in corruption, adding that it is an error to think that corruption pays.

Osinbajo disclosed this in Abuja at the unveiling of the Operation Manuals for Integrity and Zero Tolerance Clubs, organised by the Economic and Financial Crimes Commission.

According to him, many who think they can get away with corruption, are often surprised that the long arm of the law even if sometimes slow, eventually catch up with them.

There is no time bar or statute of limitation against a crime. A man who steals this year can be arrested in 10 years’ time for his crimes.

So when you steal, you cannot sleep with both eyes closed because every knock at the door will get you worried.

Which is why the establishment of integrity clubs in schools is so important.

Osinbajo said it was important to first recognise that integrity, honesty, and trustworthiness were crucial individual and collective attributes for successful people and communities.

He added that every corrupt act was not just a crime, but a crime against society and even children yet unborn.

Every public officer who steals robs the Nigerian society of funds for health care, education and so on.

In our integrity clubs, we must become policemen against corruption and wrongdoing

Whether it is a member of government or a shop assistant or your friend in class who is cheating, they destroy our reputation.

The vice president commended “the visionary Chairman of the EFCC for the great initiative”.

For realising that we must develop an anti-corruption army. That army is waiting in our schools, and we must teach them early that corruption is the worst destroyer of destinies and people.

And they must fight it as you fight a mortal enemy in war.

Osinbajo explained that the conceptualisation of the manual deserved commendation and the establishment of the clubs in schools was timely.

The greatest challenge which we face currently is how to safeguard the youth from the ethical crisis and confusion confronting our nation.

The EFCC Chairman, Mr Abdulrasheed Bawa, said the choice of school children and youths as torchbearers in this important crusade was formed by the fact that they were vulnerable to the effect of economic and financial crimes.

He highlighted that the Commission had designed programmes and activities aimed at nurturing a culture of integrity in the formative years of young Nigerians.

According to him, two of such programmes are the EFCC Integrity Club for primary and secondary schools and Zero Tolerance Club for tertiary institutions.

He added that the clubs were designed not only to improve children’s and youth’s understanding and sensitivity to the issue of economic and financial crimes but also to promote integrity, honesty, transparency and accountability.

The manuals which are being unveiled today are viable templates that will ensure that our children and youth are exposed to impactful and life-transforming values in an organised and sustainable manner.

They will serve as a guide to all actors that have roles to play in moulding the characters of this young population in various schools and also offer the Commission a framework for quality assurance and control.

We believe that this Club adds a welcome variety to the learning experience of our children and youth with long-term potential as a catalyst for the fight against economic and financial crimes in Nigeria.

The Chairman, House Committee on Anti-Corruption, Nicholas Shehu, assured EFCC of the House’s readiness to provide legislation and adequate funding to ensure that they carry out their mandate.

He commended the EFCC for the initiative, which aimed at taking the battle right to the grassroots and to the young ones so that when they grow up, they would appreciate that corruption has a negative impact on our country.

The Chairman, House Committee on Financial Crimes, Abdullahi Dutse, said that the idea of catching them young was laudable.

If all of us are brought the way the EFCC Chairman is doing now, probably there may not be less corruption as it is today. These young ones will grow up to be better citizens.

The Minister of Education, Malam Adamu Adamu, represented by Adegboye Adebola, said the manuals would serve as advocacy tools in mobilising Nigerian students to embrace patriotic zeal in fighting against economic and financial crimes.

He appealed to all stakeholders in the education sector especially parents and teachers to use the manuals as a tool to sensitise students.

For the earlier, we start to inculcate the values of integrity and handwork in our students, the better for our nation.

On her part, Mrs Elizabeth Godwin, the Principal, Model Secondary School, Maitama, said that the school stood against corruption.

We will do everything within our power to encourage our students to stand up against all forms of crimes in society.