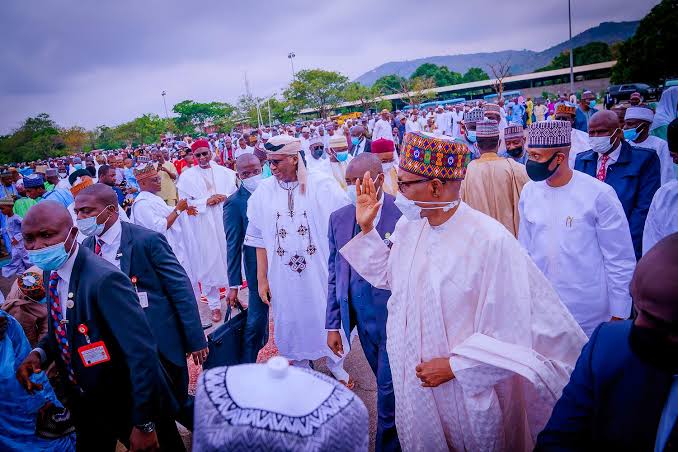 President Muhammadu Buhari has stated that increased disclosure of unusual activities will expose bandits and terrorists, nudging the security apparatus to eliminate threats across the country.

Buhari stated this while speaking to newsmen after the Eid-el-Kabir prayers at his country home, Daura, Katsina State, on Saturday, July 9.

The President’s spokesman, Malam Garba Shehu, in a statement, reported the president as saying that all those that had unleashed mayhem on innocent citizens should reflect on their atrocities, knowing that they soiled own name and their family reputation.

We are praying that the rainy season will be good for production of the food we eat in the country.

Look at when we closed the borders for about two years, a lot of people went back to the farms and they have not regretted that decision. Now we are feeding ourselves and exporting rice.

My advice is about people that are organising themselves and attacking institutions and communities. The people know them. So let them report them to the security agencies.

I hope they will sit and reflect and make sure they save their names and their families.

At the prayer ground, the Emir of Daura, Dr Faruk Umar Faruk, said the President had represented the Daura Emirate and indigenes well in his service to the nation, upholding his integrity at all times and working for the collective good of all.

He has done well to ensure peace and turnaround of the economy, and all that is within his capacity to promote safety in Nigeria. He remains a man of integrity and we are proud of his achievements.

For more than seven years, he has been working for the good of the country. We pray that God will surround him with people that will help him.

The Emir said the community had always been proud of President Buhari, knowing his penchant for fairness, justice and upholding the rule of law.

No one can accuse him of theft or any form of corruption. We the people of Daura are behind you, Mr President. The work you have done for the community and the country, it is only God that will reward you.

President Buhari walked most of the way home from the prayer ground to felicitate with people in Daura, eliciting cheers, prayers and praises.