Nigerian rapper, Ruger has cleared the air about his relationship status with Nollywood actress, Susan Pwajok.

The 22-year-old Jonzing World artiste confirmed that he is in a relationship with the 19-year-old Plateau State-born actress barely 24 hours after he mentioned she was only his ‘bestie‘.

On Tuesday night, Ruger who was a guest on Clout Africa’s Clout Talk concert 2.0, initially referred to The Johnson’s star as his bestie.

Speaking at the show hosted by comedian, Broda Shaggi, the singer said; “Susan has always been my friend and she is my Bestie and that’s all I can say about that”.

However, less than 24 hours after his interview was aired, Ruger took to his Instagram story and stated that Susan is his girlfriend.

The musician confirming their relationship wrote;

Ok @susanpwajok is my girlfriend. Y’all can get off her d**k now thank you 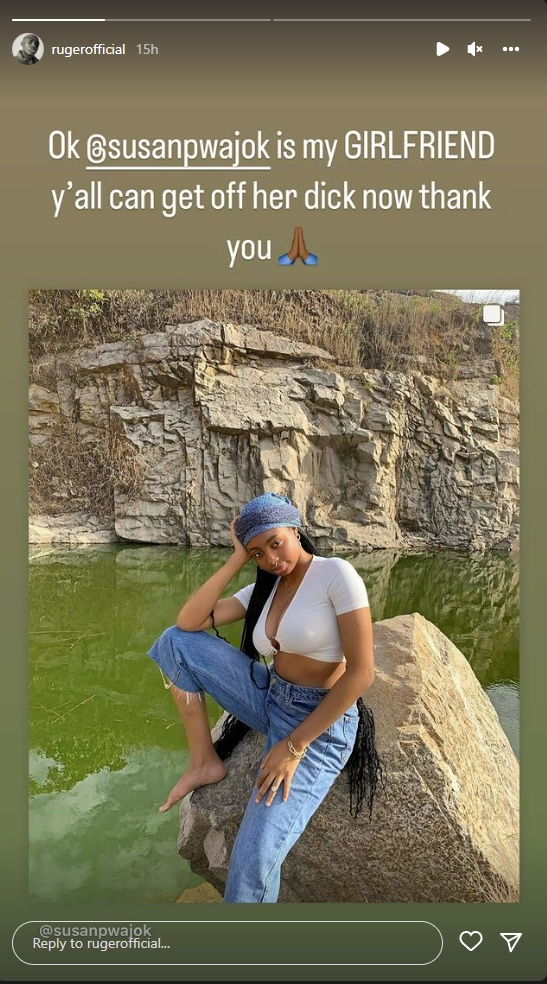 Ruger’s confession comes few days after the actress shared a slideshow of their loved-up moments with Charlie Puth and Wiz Khalifa’s “See You Again” hit track as the background song on TikTok.

Michael Adebayo, popularly known as Ruger, is a Nigerian Afrobeat singer and songwriter.

Ruger came into lime-light 2021 after he signed a record deal with D’Prince “Jonzing world record” with a publishing and distribution deal with Columbia Records, and Sony Music Entertainment, U.K division.

While, Pwajok is an actress who is popular for her role as ‘Blessing’ in The Johnsons.

She was born on January 15, 2003 and hails from Berom, a tribe in Plateau state although she grew up in Lagos.

Susan started her acting career at the age of 3 however her breakthrough into the limelight is attributed to her roles in “The Johnsons” and other movies including “Stopping Khloe” and “Desperate Housewives Africa.”

Her first notable movie was “The Tunnel” released in 2014 and also features notable personalities including Patrick Doyle and singer Waje.