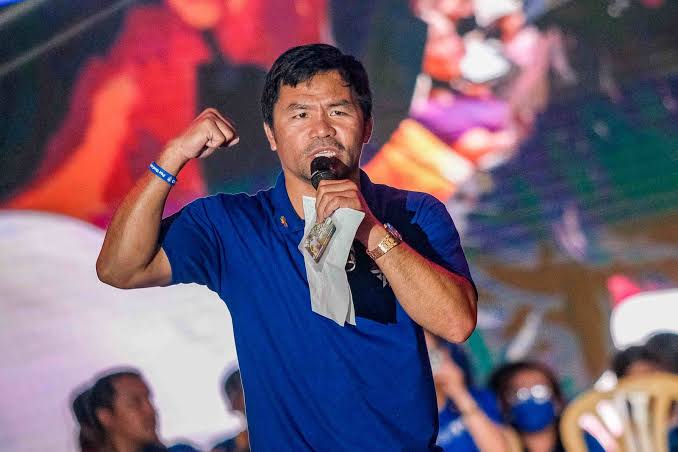 Boxing legend, Manny Pacquiao has been defeated in Philippines presidential race after quitting the sport that lifted him out of poverty.

His bid for the top job started in typical bold style: a livestream broadcast of himself riding in a coach emblazoned with “Man of Destiny” through Manila’s morning traffic to file his candidacy.

Read Also: Manny Pacquiao Retires From Boxing To Contest For Presidency In The Philippines

However, his vow to jail corrupt politicians and arrest drug users – despite having admitted using crystal meth and marijuana when he was younger – failed to deliver a knockout punch and he lost Monday’s election by a huge margin.

That left him a distant third behind winner Ferdinand Marcos Junior, who got more than half the votes, and runner-up Leni Robredo.

The loss came as no surprise — pre-election surveys showed Pacquiao had almost no chance of winning.

However, the fervent evangelical Christian convert had talked up his chances of victory until the last moment.

Read Also: ‘I May Not Return To Ring’, Says Veteran Boxer, Pacquiao After Being Defeated By Ugas

“I believe there are more poor people than rich ones,” Pacquiao told reporters on Monday as he voted in his southern home province of Sarangani.

“We want to assure them that the majority of the poor will unite to show the rich that there are more people suffering in poverty in this country,” said Pacquiao, who lives in an enclave of billionaires and foreign ambassadors when he is in Manila.

The failed tilt for the country’s highest elected office has cost Pacquiao more than just money and pride — he also had to give up running for a second term in the celebrity-packed Senate, which he likely would have had a strong chance of winning.

In an interview with AFP in November, Pacquiao, a former congressman, ruled out a sporting comeback if he lost the presidential election.

The father of five stated;

Pacquiao said he would instead grow fruit on a 20-hectare (49-acre) property in Sarangani.

Pacquiao is deeply admired across the archipelago for his rise from desperate street kid to one of the greatest pound-for-pound fighters of all time.

But he has stirred controversy as a politician and devout Christian.

Pacquiao was a high-profile supporter of Duterte’s deadly drug war and push to restore the death penalty.

His credibility took a punch from his own admission of past drug use, while homophobic comments cost him a lucrative sponsorship deal with sportswear giant Nike.

Critics also accused the high-school dropout of lacking intellect and barely turning up to sessions in Congress and the Senate, which had raised questions about his ability to run the country of 110 million people.

And he risked valuable political capital last year in a public spat with Duterte that led to a deep fracture inside their political party.

Pacquiao announced his retirement from boxing in September, shortly before declaring his run for the presidency.

Asked when the star would concede defeat, a spokesperson said Pacquiao was “resting” after the months-long campaign and voting.

“Senator Pacquiao conveys his heartfelt thanks to the journalists and wishes you will continue to enjoy the freedom of expression.”

Manny Pacquiao Retires From Boxing To Contest For Presidency…

‘I May Not Return To Ring’, Says Veteran Boxer, Pacquiao…