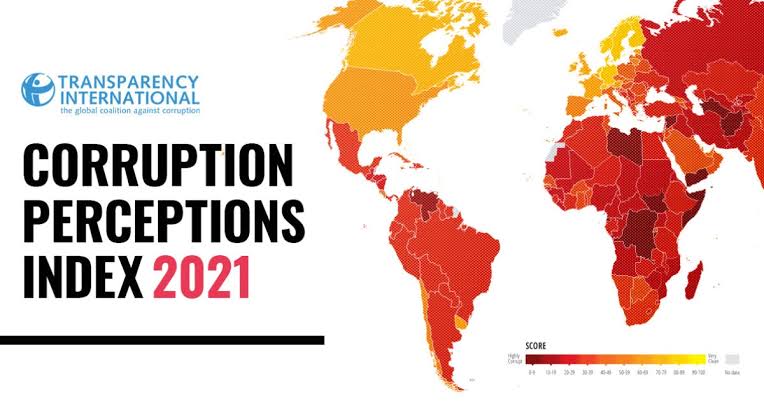 According to the 2021 ranking released on Tuesday by the agency, Nigeria dropped five places.

This is Nigeria’s second consecutive year of a downward spiral on the TI’s CPI ranking. The country’s score dropped from 26 in 2019 to 25 in the 2020 assessment, and further to 24 in the latest 2021 record.

The 2021 Corruption Perceptions Index released by Transparency International today shows corruption is on the increase in Nigeria.

In the Corruption Perceptions Index 2021, Nigeria ranks 154 out of 180 countries and territories, falling back five places from the rank of 149 in 2020.

Also on its website, Transparency International explained that Nigeria hit a historic low on the 2021 CPI.

More than 100 powerful individuals were exposed as having used anonymous companies to buy properties with a total worth of £350 million in the United Kingdom alone. Secretive dealings among Nigeria’s powerholders were previously reported as part of the Panama papers and FinCEN Files.

The CPI is TI’s tool for measuring the levels of corruption in the systems of various countries around the world. The maximum points a country can score is 100 points, and the least is zero. Zero signifies the worst performing countries and 100, the best-ranked.

The organisation listed seven weaknesses that impede Nigeria’s fight against corruption while calling for an immediate improvement for the sake of ordinary Nigerians.