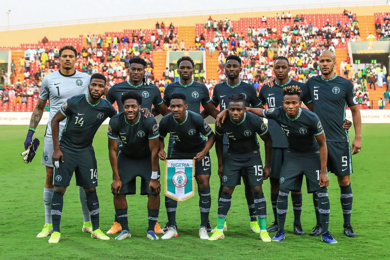 In the lineup released on Saturday, Eguavoen decided to maintain the same starting XI (11 players) that defeated Egypt 1-0 in their first match on Tuesday.

This means that Taiwo Awoniyi and Kelechi Iheanacho will start the match against Sudan in Garoua while Moses Simon and Samuel Chukwueze attack the North Africans from the flanks.

The back four will be coordinated by William Troost-Ekong, Kenneth Omeruo, Ola Aina, and Zaidu Sanusi while Watford-bound Maduka Okoye is expected to be behind the sticks.

Wilfred Ndidi and Joe Aribo also have the license to protect the back four.

Nigeria are in Group D alongside Sudan, Egypt and Guinea-Bissau.

Below is Nigeria’s starting XI against Sudan:

The second Group D encounter between Nigeria and Sudan will kick off at 5 pm in Stade Omnisport Roumde Adia.