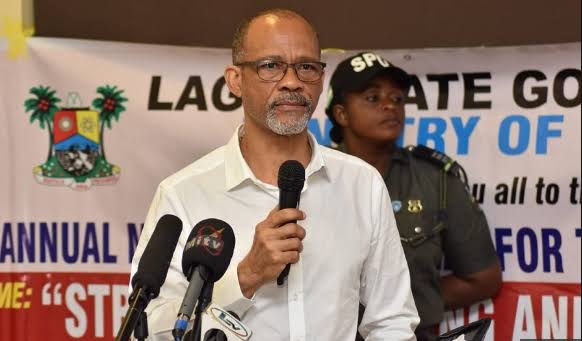 Lagos State Government is considering extra shots of vaccine for persons who may already have taken the two shots prescribed, it has emerged.

The State Commissioner for Health, Prof. Akin Abayomi, revealed this on Tuesday at a press briefing in Ikeja, stressing;

So we know that the vaccine is certainly protecting the population from severe disease and death. So the question is, as the virus is changing, it may require that we need to give you more than two doses.

You may require a booster which is the first, second and subsequent doses because we have also discovered that even though the vaccine stops you from getting seriously sick, it may not necessarily stop you from catching Covid.

Professor Abayomi explained that the state government plans to vaccinate 30 percent of Lagos residents by the end of the year.

According to him, scientists around the world are toying with the idea that a third or fourth dose may be required.

Meanwhile, the members of the Diplomatic Community in Lagos have scored the state government high on its COVID-19 response and management effort which have seen the nation’s commercial capital overcome three successive waves of the global pandemic.

Speaking during a visit to Professor Abayomi, members of the Diplomatic communities agreed that Lagos State Government has done a lot to mitigate the scourge of the infection while pledging to continue to offer support to the COVID19Lagos response directly and indirectly.

In her remarks, the Consul General of France in Nigeria, Laurence Monmayrant said she is impressed by the biosecurity facilities that were put in place at IDH by the State Government to prosecute the war against the global pandemic.

I’m really impressed by what I have seen today, I enjoyed the visit because this is really something we’ve been looking at since the beginning of the pandemic, we’ve seen that Lagos State has done a lot.

But it is one thing to read and see it in the media report and it is another thing to come and see on the spot what is happening here, so it was a very interesting day here today.

She harped on the need to ensure that more citizens are vaccinated as a way to mitigate the new wave of the pandemic.