A legal practitioner, Ebun-Olu Adegboruwa, has raised alarm about attempts to frustrate the outcome of the probe of Nigerian Army invasion of Lekki toll gate in Lagos state.

Adegboruwa is a member of the Lagos Panel of Enquiry and Restitution for Victims of Special Anti-Robbery Squad (SARS).

The Senior Advocate of Nigeria (SAN) raised an alarm on Saturday in a terse statement via his Facebook page.

EndSARS Panel Being Frustrated; there are attempts to frustrate the EndSARS Judicial Panel from reaching meaningful conclusions on investigations into the Lekki Toll Gate Incident of 20th October 2020. I will give details subsequently. 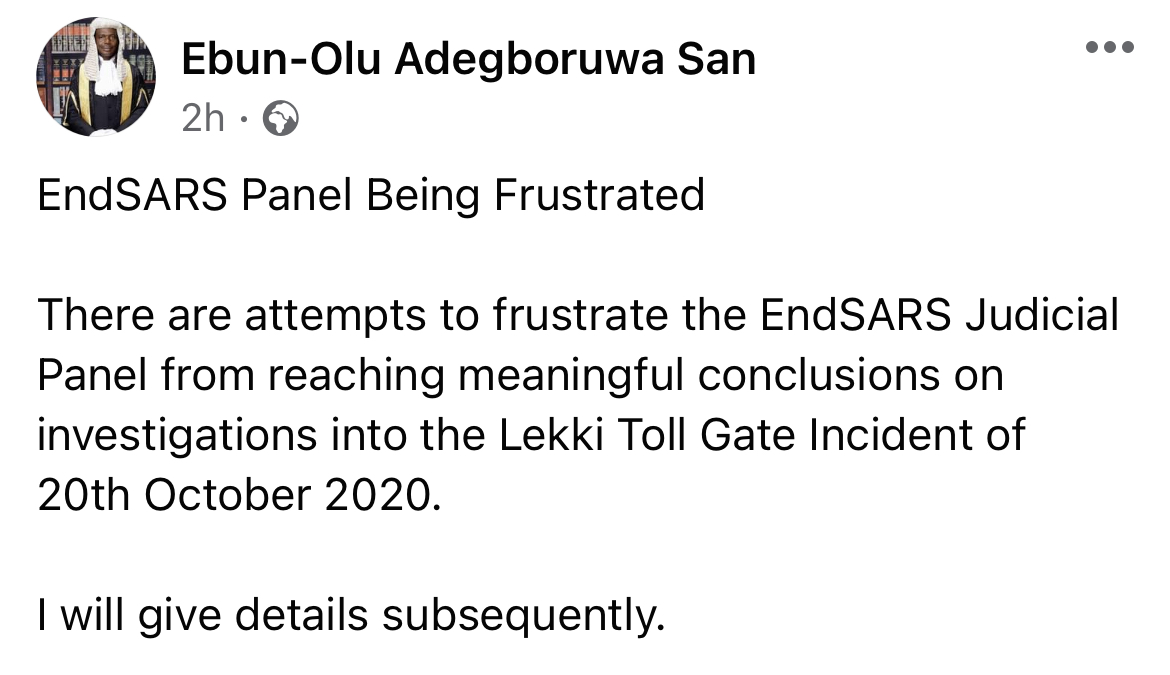 Doris Okwuobi, the retired judge heading the panel, made the announcement today, saying the panel is expected to work on two reports before the expiration of its tenure.

The chairperson appealed to petitioners and counsels to bear with the panel, adding that notice of hearings will be sent out for petitions that have not been concluded.

On October 20, 2020, troops marched to the Lekki tollgate and opened fire to disperse hundreds of protesting Nigerians.

Across the country, SARS has been indicted for arbitrary killings, detention and disappearance of scores of civilians.

The retired judge ruled after another application by Demola Seriki, counsel to the LCC. Some members of the jury opposed it.

Read Also: ‘I Won’t Be Part Of A Cover-Up’ – Youth Rep, Rinu Oduala Steps Down From Lagos #EndSARS Panel

The day’s sitting witnessed drama as Okwuobi and others walked out after Adegboruwa raised objection to the ruling.

Around the time, Oduala, a vocal End SARS advocate, stepped down from the panel, vowing not to be part of “a cover-up”.