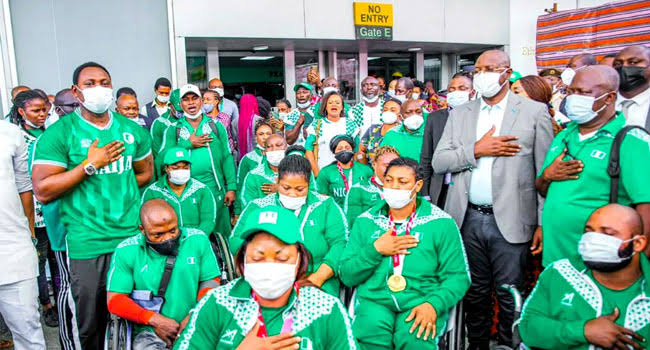 Team Nigeria have on Saturday ended its campaign at Tokyo 2020 Paralympic Games on a bright note, winning another gold medal as well as a bronze on the final day of action.

The overall medal haul is just two short of Nigeria’s record set in Rio 2016 where the country made the podium 12 times.

Lauritta Onye started the closing day of Nigeria’s contest by winning bronze in the women’s F40 shot put event before Flora Ugunnwa ensured Nigeria signed out on a high from Tokyo with gold in the F54 javelin event.

She fell short of retaining her gold medal from Rio, settling for a season-best throw of 8.29 meters to finish behind Poland’s Renata Sliwinska and Djelal Salem of Algeria.

As reported by SportsTalkAfrica, Lauritta competed under very difficult conditions on the wet and slippery grounds of the stadium.

She nonetheless threw 8.29 metres which was enough for a podium finish but could not rattle gold medalist, Renata and Salem secured the silver with a throw of 8.33 metres.

However, Flora Ugunnwa turned the story around in the F54 javelin final which was Nigeria’s last event in Tokyo.

The 37-year-old retained her Paralympic crown with a sensational 19.39 meters throw to register a new season-best on Friday.

Flora was the only contender to go beyond 19-metre mark as dusted her opponents with her 18.39 metres throw to leave Kurbanova Nurkorn of Uzbekistan and Yang Liwan of China in the second and third positions respectively.

She told Sportstalkafrica.com in Tokyo she had planned to achieve more at the Paralympic Games but remains thankful to God for the gold medal.

My aim was to break my own record and set a new one. We had good training during our camping, thanks to the Minister of Sports (Sunday Dare) who ensured that the conditions were conducive, but the situation changed somewhat as we got into Japan. I had a little bit of difficulty with the time zone and weather, and I also became ill. All the same, I kept on and I thank God I ended with the gold.

I dedicate it first to God who has been my strength and then to my husband and children; to my coach, Patrick Anaeto, as well as to coach Ade who has been very helpful through this period.

With the 10 medals won, Nigeria is currently occupying the 31st position behind two African countries, Tunisia and Algeria, who also have four gold medals like Nigeria but have more silver and bronze medals.

Meanwhile, the first batch of athletes that represented Nigeria at the Tokyo Paralympics have returned to the country amidst fanfare.