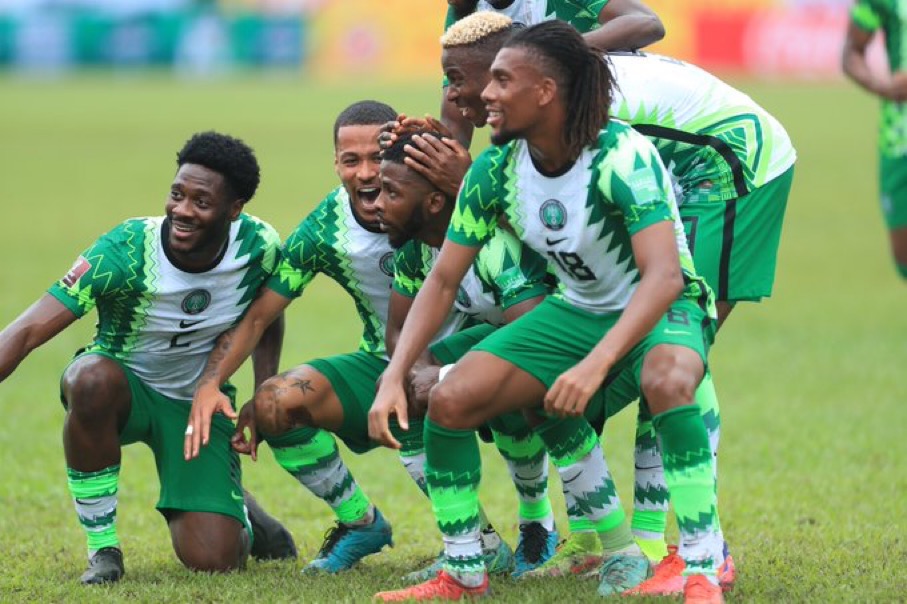 Super Eagles of Nigeria have on Tuesday, September 7 beaten the Blue Sharks of Cape Verde 2-1 in the World Cup Qualifiers in Mindelo.

Victor Osimhen’s strike and Kenny Rocha Santos’ own goal helped Nigeria come from behind to beat Cape Verde in their qualifying game.

Two defensive blunders from the hosts secured maximum points for the Super Eagles as they clinched back-to-back wins in Group C, thus helping the three-time African champions grab a crucial win on the road as they stretched their dominance in the group.

However, a 75th-minute own goal by Cape Verde earned the Eagles the victory, a result that propelled the Super Eagles’ leadership of the pool as they await a home-and-away fixture against Central African Republic next month.

Dylan dos Santos steered the home team in front after 19 minutes of an intense back-and-forth by both sides, when he slipped behind the Eagles’ rearguard and slammed a rocket of a shot past goalkeeper, Maduka Okoye.

Tuesday’s win in two games has pushed the Eagles three points clear at the top of Group C ahead of Liberia, Central African Republic and Cape Verde.

In the match, the Blue Sharks drew first blood in the 19th minute after Dylan Dos Santos beat an offside trap to fire his left-footed shot past goalkeeper, Maduka Okoye.

Five minutes later, Ryan Mendes tried to test the Super Eagles shot-stopper with another shot but it went off target.

Osimhen and Ejuke linked up a few minutes later as Nigeria kept pushing for an equaliser and the CSKA Moscow winger forced Cape Verde’s Vozinha to parry his long-range shot for a corner-kick.

Their push finally paid off as Osimhen capitalised on a defensive error to draw both teams level in the 29th minute.

Meanwhile, the Minister of Sports, Sunday Dare has commended the Super Eagles on their second consecutive win of the 2022 World Cup qualifiers.

He also hailed Nigeria Football Federation (NFF) for ensuring that the team travelled in comfort.

Congratulations to Nigeria, congratulations to all Nigerians and the Super Eagles. The team has made us proud once again. I salute everyone for the roles they played. The NFF ensured the team travelled in comfort and the coaches had to overcome a lot of setbacks owing to the COVID-19.

In the game we had to dress only 19 players as against the 23 allowed by FIFA for World Cup qualifiers, added to this, we had to fight from a goal down to snatch all three points at stake.

In spite of this victory, I will like to charge everyone that the journey to Qatar is still a long one. We must keep fighting and working hard until the World Cup ticket is firmly in our hands.